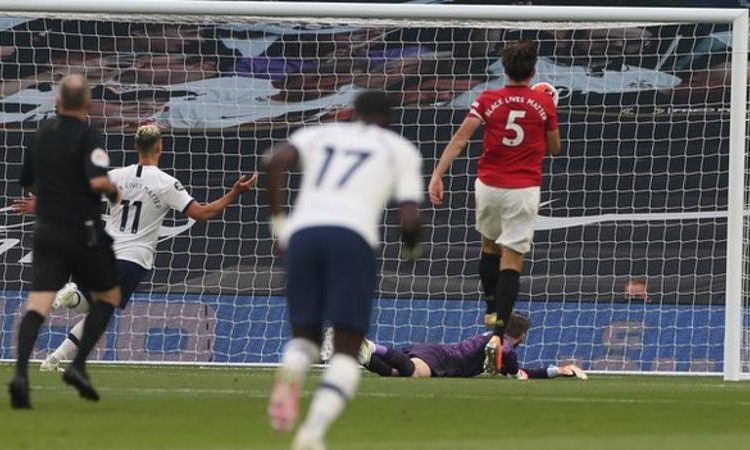 Former Manchester United captain Roy Keane said he is “sick to death” of David de Gea – and that the goalkeeper and captain Harry Maguire should be made to get a taxi back from Tottenham.

Keane, who won seven Premier League titles with United, ranted at half-time after Steven Bergwijn ran past Maguire and fired through De Gea to score.

“I wouldn’t even let them on the bus after the match,” he told Sky Sports.

“Get a taxi back to Manchester. They should hang their heads in shame.”

Bergwijn easily beat England international Maguire for pace, and De Gea could not hold his powerful shot as Jose Mourinho’s side took a half-time lead over his former club in Friday’s Premier League match, which ended 1-1.

De Gea has made the joint-highest number of errors leading to a goal of any goalkeeper in the Premier League since August 2018 – seven – though Bergwijn’s goal was not recorded as one.

Maguire, who United signed from Leicester for £80m last August, has not officially made an error leading to a goal this season.

🗣 "I'm flabbergasted, I wouldn't even let them back on the bus after the match. I'm disgusted with it"

“I’m shocked. I’m shocked at that goal,” Keane said at the interval.

“I’ve watched a lot of football over the years and to give away that goal… I’m fuming.

“I can’t believe that’s Manchester United. Luke Shaw, heading the ball up in the air and then running forward… I am staggered at Maguire, how an international player can just get done like that – and I am sick to death of this goalkeeper.

“I would be fining him [De Gea] at half-time, there is no getting away from that. I would be swinging punches at that guy. That is a standard save for an established international goalkeeper.

“I am flabbergasted. Maguire and De Gea… I wouldn’t even let them on the bus after the match. Get a taxi back to Manchester. Do your job. We’re trying to get into the top four – never mind win trophies – shocking. I am disgusted. They should hang their heads in shame.”

When asked about Keane’s comments, Manchester United manager Ole Gunnar Solskjaer replied: “Roy was a fantastic midfielder, a good friend of mine. I am not sure he would have stopped it.”

“I’d maybe let them on the bus but make them sit down at the back,” he said.