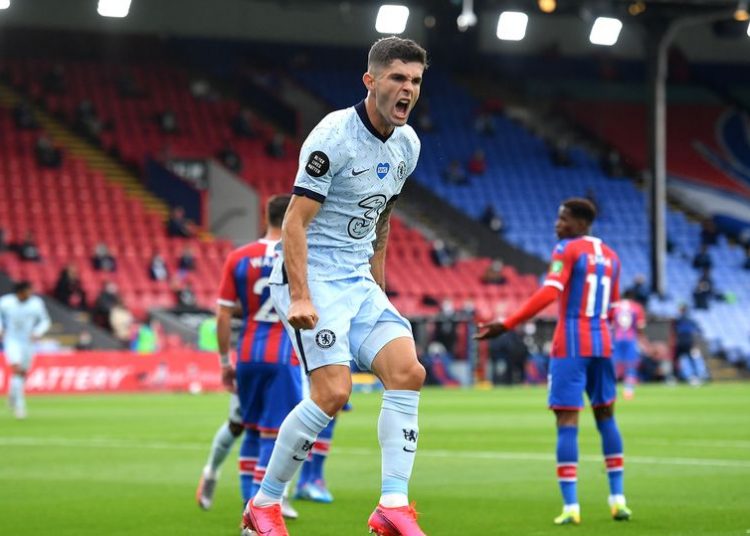 Chelsea strengthened their position in the top four of the premier league with victory over Crystal Palace in an entertaining encounter at Selhurst Park, that included a stunning long-range strike from Wilfried Zaha and a rare goal from Christian Benteke.

There was an element of fortune about the game’s opening goal, with Palace defender Gary Cahill pulling up with a match-ending injury to allow Willian to charge into the box unimpeded and set up Olivier Giroud to finish.

But the rest of the match was a testament to the kind of competitive, high-octane, see-saw football that draws so many viewers to the English top-flight, even when the grounds are empty of fans.

Twice Chelsea looked to have put the game beyond the home side, first through Christian Pulisic’s rising shot to make it 2-0 in the first half and then via Tammy Abraham’s neat finish with 19 minutes to go to put the Blues 3-1 up.

But this reckoned without the input of Zaha and Benteke.

Zaha’s goal was a superb strike, fiercely fired into the net via the crossbar from an unlikely distance. Benteke’s was more routine, tapped in from point-blank range following a neat move, but almost as surprising, it being his first goal at Selhurst Park since April 2018.

And Palace came within a whisker of snatching a point when Scott Dann’s back-post header struck the inside of the post before Chelsea hacked the ball clear.

Chelsea’s win means they move above Leicester into third place in the table, five points ahead of fifth-placed Manchester United.

With 42 points to their name, Palace have too many points to worry about being dragged into a relegation fight, but manager Roy Hodgson and his side will be eager to end a losing streak that has now stretched to four games.