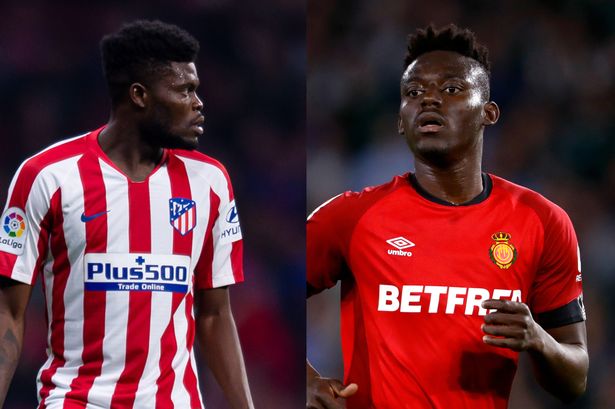 We are definitely not in normal times, as far as the world of football is concerned, but that hasn’t stopped clubs from stepping up preparations for next season; whenever it’s set to begin.

Transfer rumours are beginning to dominate the headlines, and some marquee names have been tipped to make some big moves, as clubs fine tune their respective squads for coming season.

Here is a list of 5 Ghanaian players who must make a move this summer window.

Thomas Partey has enjoyed a fairly successful time at Spanish side Atletico Madrid. He played an integral role as Diego Simeone’s side won the 2018 Europa League title.

Despite his impressive performances for the Madrid based side, he is still yet to command the limelight and carve out super star status for himself.

With Premier League side Arsenal knocking at his door, and reportedly prepared to trigger his €50m release clause, the 27 year old may see the Premier League as his chance to propel himself into stardom.

Arsenal are reportedly ready to double his current weekly wages, and this could prove too good for the Ghana international to turn down.

Defender, Mohammed Salisu, has been one of the standout performers in the 2019/2020 Spanish La Liga season.

The 21 year old center back has been rock solid for Real Valladolid, with the side boasting of the league’s 7th best defense.

Salisu is valued at just €11m on transfermarkt, and this could be tempting for his suitors, considering his great talent.

Manchester United, Southampton, Everton and West Ham United have all being linked with a move for the Ghanaian, and he will be looking to make that big move as soon as possible, especially with the lure of the platform that is the Premier League.

It’s safe to say the 2019/2020 season has been one to forget for Newcastle winger Christian Atsu.

After a couple of impressive performances at the start of the season, Atsu has since struggled to break into the first team.

He was one of the regulars under former boss Rafa Benitez, but the Ghana international has been surplus to requirements under current boss Steve Bruce.

The 28 year old has been limited to just 6 league starts all season, with the likes of Allan St Maximin and Matt Ritchie well ahead of him in the pecking order.

This seems also to have affected his standing with the Black Stars, missing out on the last two national team call ups.

Newcastle manager Steve Bruce has recently confessed that the Ghana international is not part of his immediate plans, and it will not be surprising to see Atsu in a different shirt next season.

Leicester City’s Daniel Amartey was on a fine run of form, before a horrific injury ruled him out for several months.

The 25 year old has since struggled to find consistency and playing time, due to loss of form and injuries.

With only one appearance to his name this season, coming in the Leicester’s 3-0 win over Doncaster Rovers in the EFL Cup, Amartey has begun looking elsewhere.

His agent has admitted the Ghana international is keen on a move away from the King Power, while manager of Amartey’s former side, FC Copenhagen, Ståle Solbakken, disclosed the defender has already spoken to him about returning to the club.

23 year old, Idrissu Baba has simply been brilliant for Spanish La Liga side Mallorca this season.

The defensive midfielder has caught the eye of several clubs, with Atletico Madrid reportedly looking at him as a possible replacement for his compatriot Thomas Partey, should the latter leave this summer.

The island side look set to be relegated, as they find themselves 18th on the La Liga standings, 6 points from safety, with just four games remaining.

Currently valued at just €2m on transfermarkt, Baba should seize the opportunity to leave this summer to a more established side.