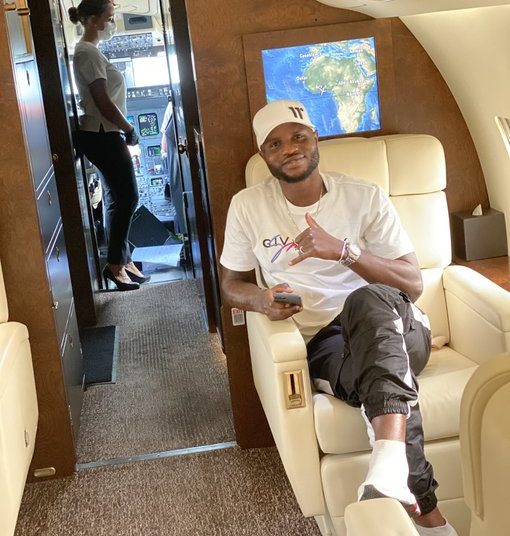 Ghana’s Mubarak Wakaso is set to finally begin his career with Jiangsu Suning after jumping on a private jet to from Accra to Nanjing Thursday afternoon.

The midfielder was signed by the Chinese Super League side from Deportivo Alaves during the January transfer window.

But the effect of the COVID-19 pandemic which first emerged in China late 2019 prevented him from travelling to the country to join Jiangsu Suning for the start of the new season.

Wakaso, however, was briefly with the team at a pre-season training camp in Dubai back in February before he headed to Ghana ahead of lockdown.

Jiangsu Suning and Shijiazhuang Everbright played a friendly in Dubai yesterday. Before the kickoff the two CSL sides demonstrated a slogan, delivering greetings to Wuhan and China. Mubarak Wakaso, Jiangsu's new signing, made his debut this game. CSL overseas league in UAE. pic.twitter.com/brc31zM2vQ

The combative player had since been actively engaging in personal training back home in anticipation of securing visa and clearance to travel to China.

And the time was due today (July 9) after Jiangsu Suning secured permission from Ghanaian authorities to fly Wakaso out with a private jet.

Per Footy-Ghana.com’s understanding, the 29-year-old is the last of six foreign players set to arrive in Suning’s camp in Nanjing ahead of the start of the new season.

The 2020 Chinese Super League (CSL) season was slated to begin on February 22 but was forced to be postponed because of the raging COVID-19.

Five months on, the CSL is now set to start on July 25 in an entirely new format.

Suzhou, in south China’s Jiangsu Province, and Dalian, in the northern Liaoning Province, have been selected as two host cities to start the season which will be contested behind closed doors.

The 16 teams have been divided into two groups, which will follow the traditional home-away round robin format, with the top four teams in each group moving into Final A and the bottom four falling into Final B.

Meanwhile, Mubarak Wakaso and compatriot Frank Acheampong of Tianjin TEDA fame are the only Ghanaians registered for the start of the season.