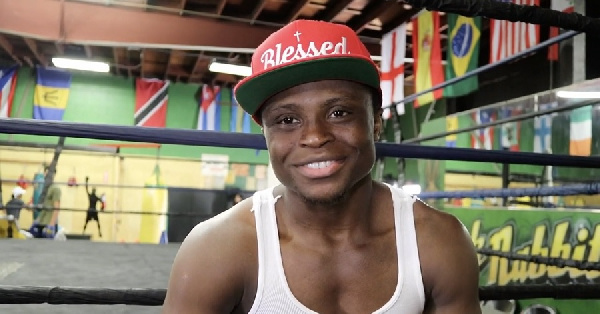 Former WBO Super Bantam weight champion Isaac Dogbe has defended the decision to keep his father Paul Dogbe as a member of his ring side personnel and entourage.

Isaac who lost his belt to Emmanuel Navarette has been advised to minimize the involvement of his Dad who has been his longtime trainer in favor of more experienced specialists.

In the past Dogboe has worked under renowned trainer Freddy Roach but the spell lasted only a month.

Speaking ahead of his July 21st bout against Chris Avalos, Dogboe says he is pleased with what his dad contributes to his craft despite contrary opinion.

“When you talk about family it is always about how you connect with people.

“For me its always like they are good for the job and they are doing great so what are we doing?

“You cant really dwell on what people say because everyone has their own ways of thinking.

“I don’t have to say that because people feel its not good to work with family I am going to follow that.

“I have to make decisions that are best for me.

“My father being the man that he is has always made sure that things are done right,” he explained in an interview with Godfred Akoto Boafo.

He has spent time in California getting in shape for his bout at the Jack Rabbit gym as he continues his way back to redemption.