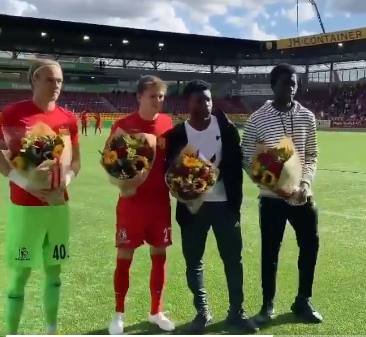 New Ajax Amsterdam signing, Kudus Mohammed, on Wednesday returned to say goodbye to his FC Nordsjaelland teamates after completing his €9 million move to the Dutch Champions.

Kudus, who turns 20 on August 2, spent the last two years with the Danish Super Lig side after joining them from Ghanaian academy Right to Dream.

On Wednesday, the former Ghana U-17 star posted a video on twitter, where Nordsjaelland coaches are seen presenting 4 players with flowers, amidst congratulatory messages and the sound of Ghanaian musician Stonebwoy’s “Journey” song blaring out loud.

Grateful for the development from the ground up to this memorable day. I leave with foot prints & fond memories at heart. I will keep cheering FCN from Amsterdam cos a Lion & Tiger are big cat family but not when I play against you 😉. We Roar together. #kudusdream #kuduspride pic.twitter.com/A94RnBbb2P

One of the players in the video, Ghanaian center back Abdul Mumin, is also leaving Nordsjaelland after opting not to extend his contract with the Danish club.

FCN’s assistant coach, a former Ghana U-20 head coach, Mas-ud Didi Dramani was also captured in the video handing out some of the flowers.

Kudus is expected to join his new teammates in the coming days. He will wear the jersey number 20.