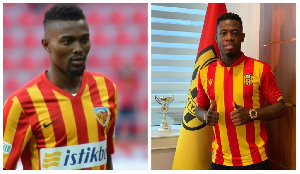 Ghana duo Bernard Mensah and Afriyie Acquah have suffered relegation with their clubs in the Turkish Super Lig.

Acquah’s Malatyaspor lost 1-0 at home on Saturday, 25 July 2020 to Gaziantep and that confirmed their demotion to the First Division next season.

The 27-year-old, who joined last summer on a free transfer, was not part of the team that tasted defeat.

He managed 27 league appearances and scored one goal.

Mensah missed Saturday’s 2-1 defeat to Trabzonspor due to suspension.

The 25-year-old scored five goals in 25 league appearances and has been linked with a move to giants Galatasaray.

The two teams and bottom club Ankaragücü, who had already been relegated from the Süper Lig, finished the season with 32 points each.