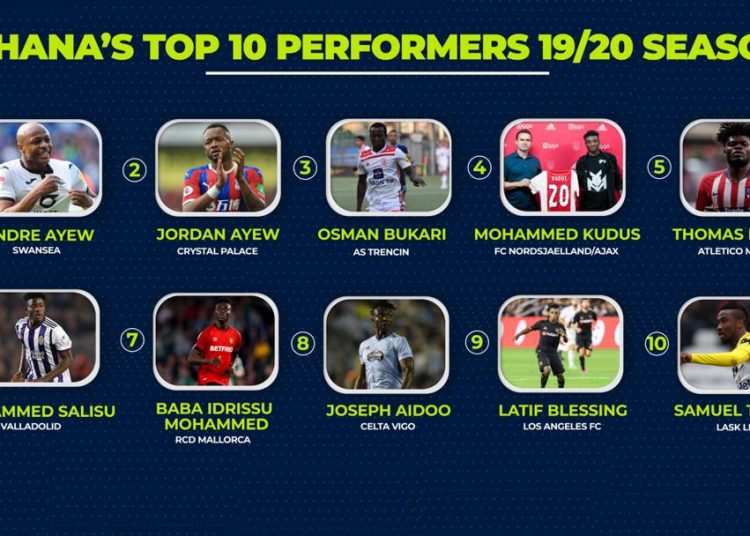 A mixture of goals, passion, hard work and then there is Coronavirus, a pandemic that threatened the total annulling of football until next season. Luckily, some leagues resumed with others like France and Holland totally cancelling their season.

In the midst of it all, some Ghanaian footballers have excelled.

Here is a Citi Sports desk report highlighting the top 10 players that have performed magnificently for their clubs across the world.

Samuel Tetteh is an RB Salzburg forward who was loaned to Austrian top tier side, LASK Linz.

Samuel Tetteh, 23, started his career at WAFA SC in Ghana and joined FC Liefering in the summer of 2016. After a season, he joined RB Salzburg in 2017 before being loaned out to LASK Linz in January 2018 for two seasons.

The forward scored 7 league goals and provided 5 assists in the process. 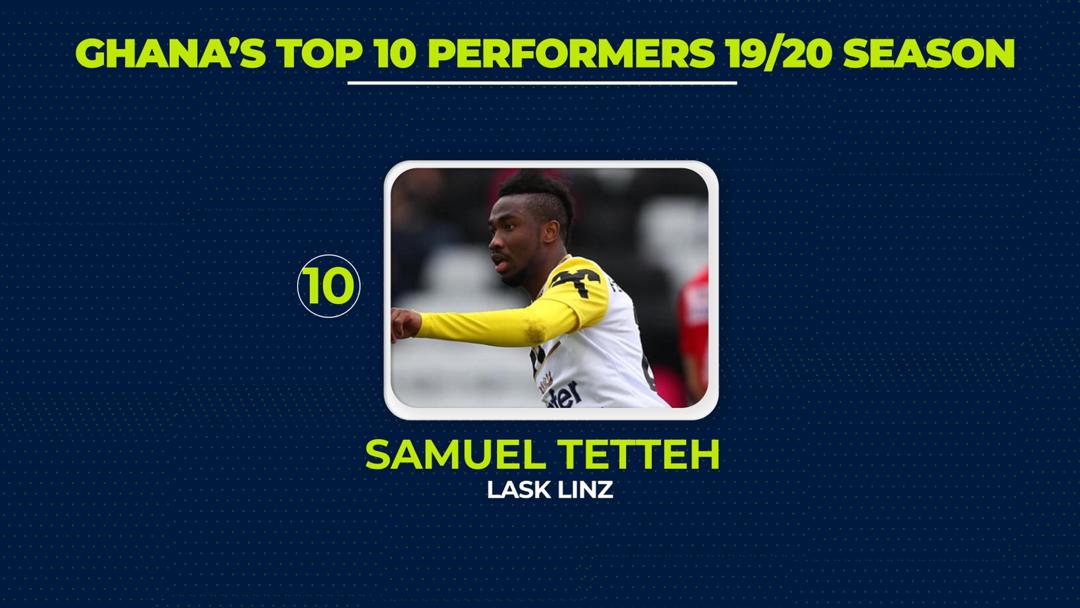 His best attributes are his vision to create goals for his teammates, pace and trickery.

He has been called up to the Black Stars in the past and will be hoping to get another chance in C.K Akonnor’s team.

The 23-year-old is making big waves in Major League Soccer (MLS) with some brilliant individual displays.

Starting his playing his career with Ghana Premier League side, Liberty Professionals, the attacking midfielder has had a surge in his career. Going on to be a star for Los Angeles FC.

Since the MLS resumed, the Ghanaian international has played three games, provided 2 assists in the process. 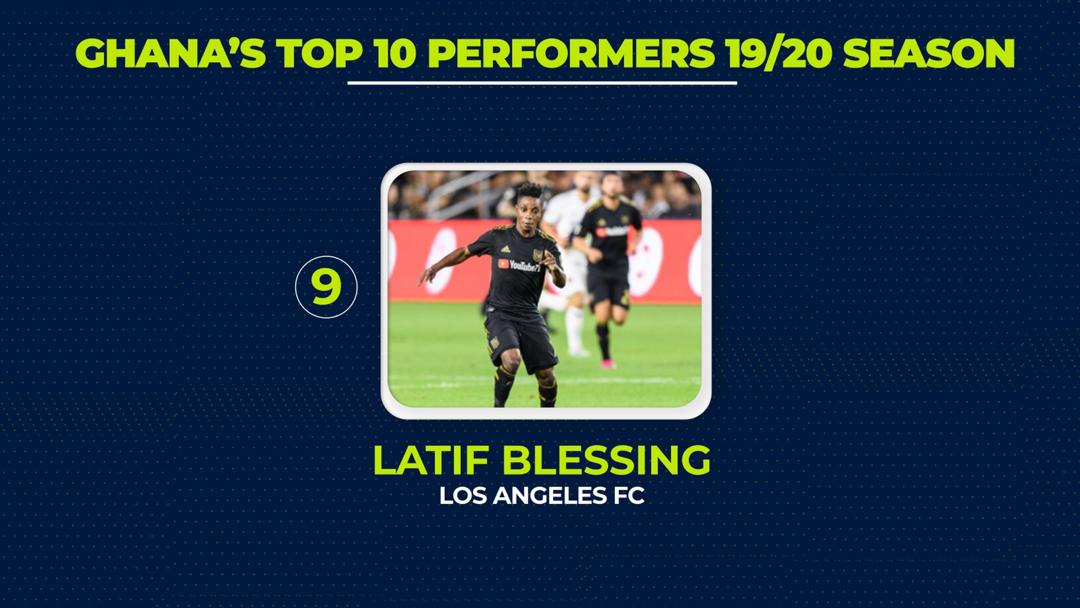 The prolific dribbler is yet to  earn a Black Stars call up.

The centre-back made a name for himself in the Spanish La Liga in the 2019/2020 season. 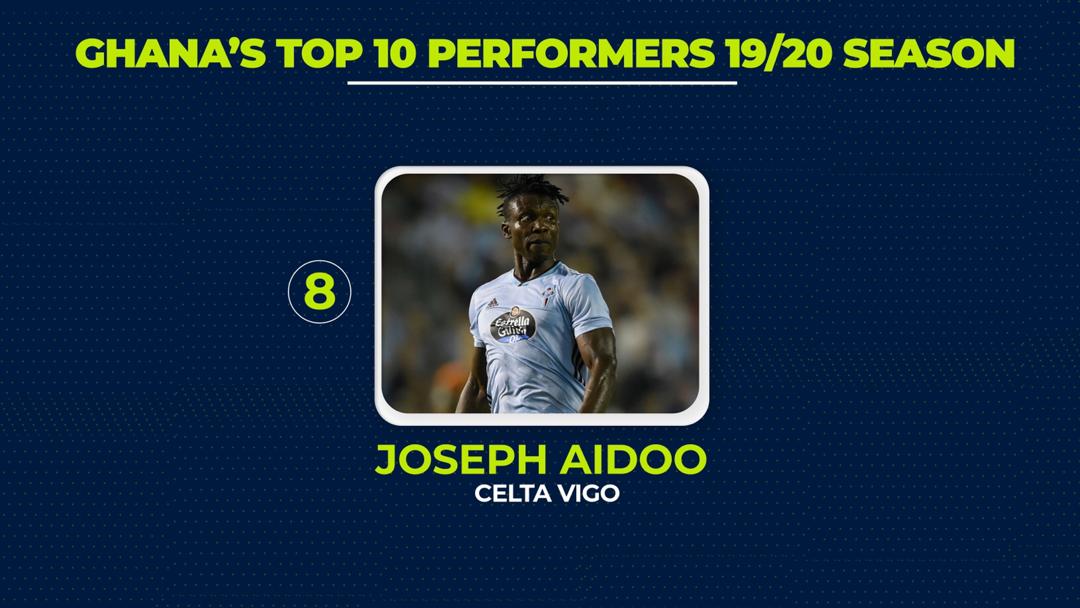 Joseph Aidoo, 24, played 32 games in the La Liga and one Copa del Rey, signifying just how important he is to the manager, Oscar Garcia Junyent.

The right-footed defender joined the Spanish La Liga from Genk after winning the Belgium league. He started his career at Inter Allies at Tema before leaving in 2016 to Hammarby in Sweden.

Joseph Aidoo helped his side keep seven clean sheets in La Liga in the 2019/2020 and provided just an assist without scoring. He also got 6 yellow cards as well.

The central defensive midfielder has been phenomenal for Mallorca this season. 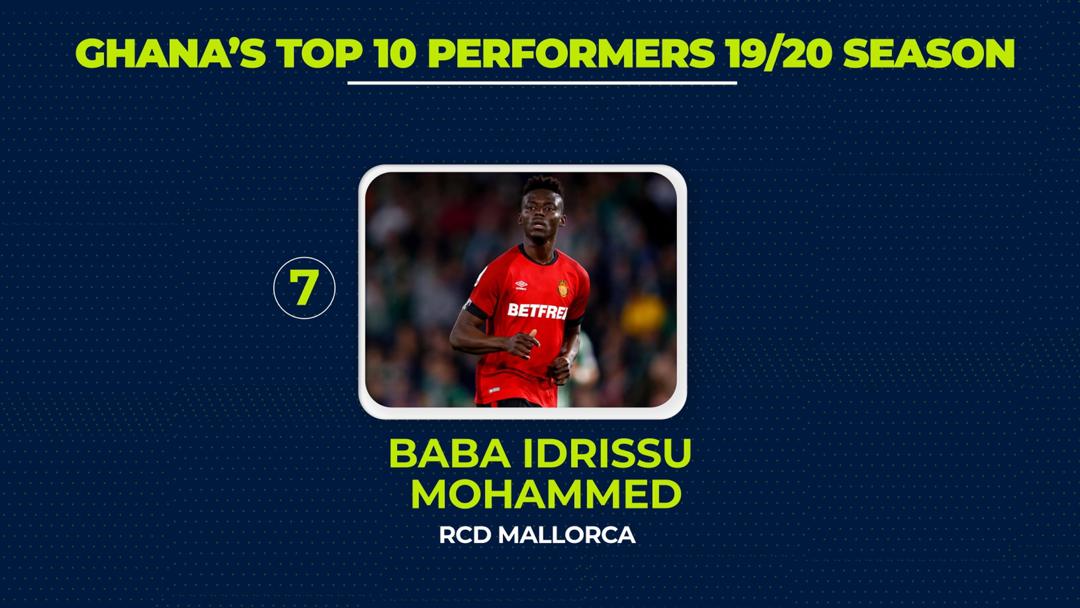 Providing a lot of cover for the back line in the Spanish league. His best attributes are synonymous to Thomas Partey. A good passer of the ball who is also strong in the tackling department.

The box-to-box midfielder played 38 games across all competitions for Mallorca. Scoring no goal or assisting.

Mohammed Salisu in the past weeks has been in the headlines in Ghana not only for his impressive performances all season but also for his proposed transfer to Southampton in the English Premier League.

The 21-year-old has made giant strides in the last 18 months and helped his club side, Valladolid to stay in La Liga by finishing the season 13th on the league log.

Standing at 6’4 foot, the centre back played 31 La Liga games and one Copa del Rey match. He scored one goal and assisted in the 2019/2020 season league season as well. With no red cards, Salisu got four yellow cards. 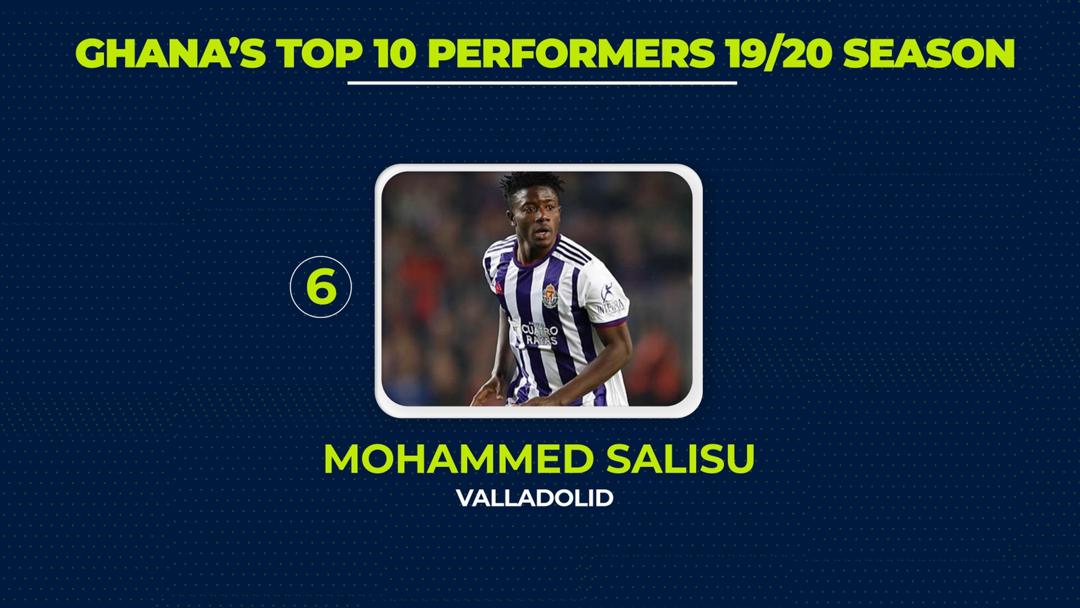 Mohammed Salisu is yet to make an appearance for the Black Stars of Ghana.

Thomas Partey needs no introduction,as he has been consistently involved in transfer talk linking him with a move to the Premier League. 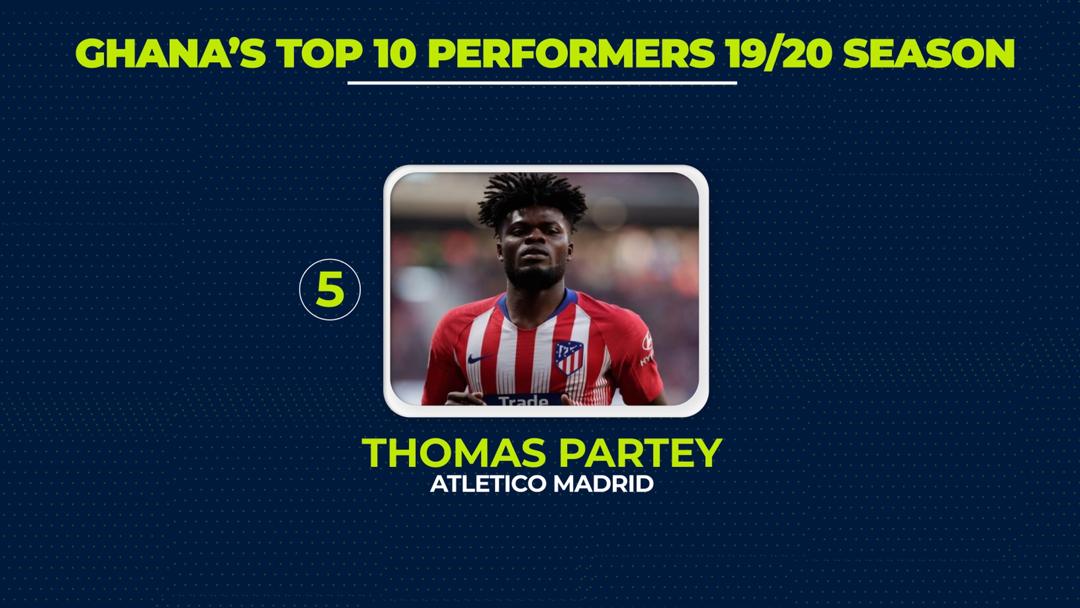 The 27-year-old has been a key figure in Diego Simeone’s team this season.

He has not enjoyed scoring a lot this season with 3 league goals and a goal in the UEFA Champions League. He has however executed various roles to perfection when it has been required of him.

The defensive midfielder has received 13 yellow cards this season.

The Ghanaian international has 26 national team appearances and has scored nine times for his country.

Kudus, who turns 20 next month completed his big move from FC Nordsjaelland to Ajax this summer after an incredible season in the Danish league.

Ajax’s new number 20 shirted player joined the club for a transfer fee reported to be around nine million Euros.

The 19-year-old scored 11 goals in 25 appearances for FC Nordsjaelland this season.

The AS Trencin’s forward is among the most productive Ghanaian players abroad in the 2019/2020 season.

Bukari, 21, has been a revelation for the Slovakian club this season, helping them place 7th on the league log. 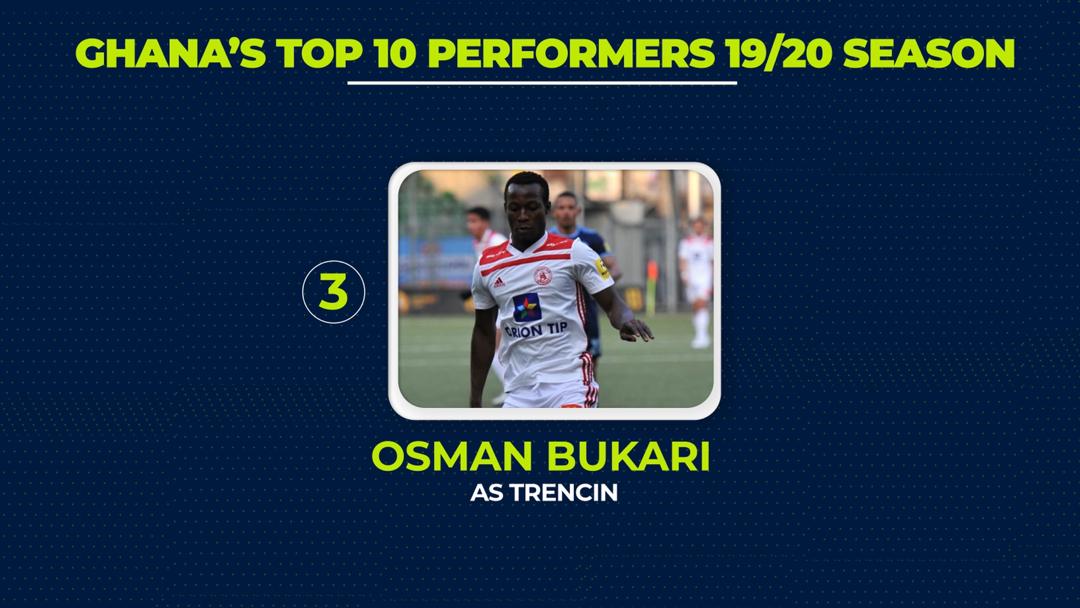 His best attributes are his pace, energy and his shot power. He is comfortable on both wings and is blessed with skill.

The pacy winger played a bit part role in Ibrahim Tanko’s Black Meteors team that failed to qualify to the Olympic games.

Jordan Ayew, 28, finished as Crystal Palace’s top goalscorer with 9 goals in 37 games which puts him second on our list. 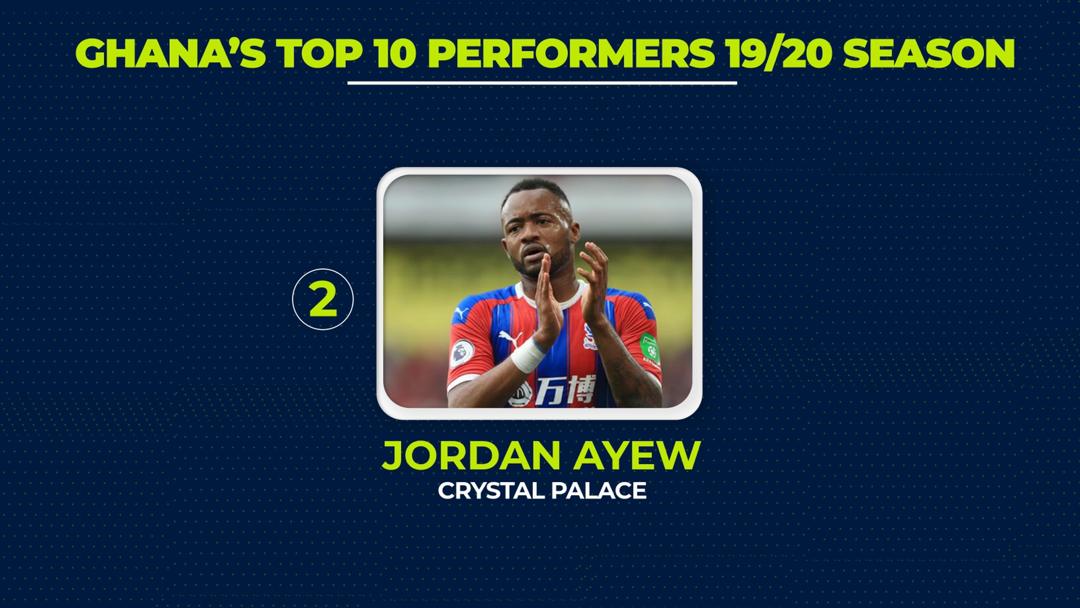 A goal tally which made him the highest-scoring Ghanaian with 25 goals in the English Premier League, beating off Tony Yeboah (24).

The Ghanaian international set that record after scoring a beautiful tap in as Crystal Palace recorded a 2-0 win over relegated Bournemouth in June.

Jordan Ayew also provided two assists in the EPL in the 2019/2020 season to help Palace finish 14th in the league.

With the battle for qualification up for grabs, Ghana’s Andre Ayew is leading by example with goals.

The Black Stars captain has been in superb form for the Swansea City in the 2019/2020 season after joining them from Turkish side, Fenerbahçe.

Dede Ayew, 30, scored his 18th goal of the season with a half-volley to help give the Swans the upper hand as they seek qualification back to the English Premier League.

The forward has not only scored, but he has also provided seven assists this season for Swansea City. 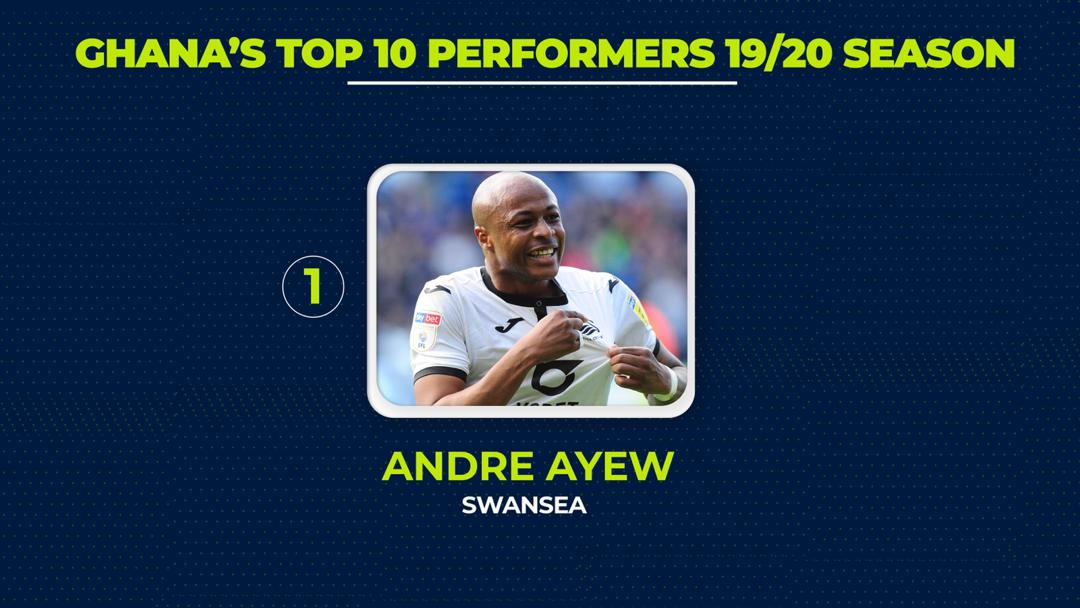 With this, he is our best Ghanaian footballer plying his trade outside the country.