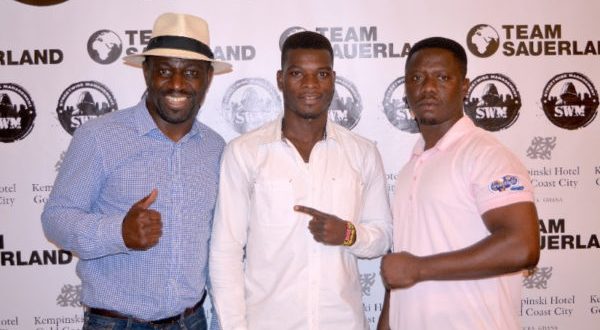 Veteran Boxing trainer Carl Lokko has revealed that former IBF Bantam weight champion Richard Commey and his manager Micheal Amo Bediako conspired to remove him from his role as trainer for Commey.

Lokko discovered Commey when he was 13 and nurtured him through the years until after his bout with Hedi Slimani at the Bukom Boxing Arena in 2017.

Speaking on The Tracker on Citi TV, Lokko explained that the manner in which his former protégé sidelined him for greener pastures left him hurt and confused.

“He had then signed to Di Bellas promotion house and had to go to the States to complete some paper work.

“At the time the trainer he is with now (Andre Rozier) was aware that Commey is my boxer.

“We were connected and we were always chatting.

“He and I went way back because my quest to be a top trainer started a long time ago.

“He was supposed to be the caretaker trainer until I arrived in the United States.

That is what Commey’s manager had communicated to me until things changed.

“He called me over the phone telling me that Commey wanted to speak to me.

“I asked him why he would not do the speaking since he was the manger but he insisted that I speak to Commey instead.

“Commey told me that he wanted to upgrade himself as a boxer and thus wanted to train full time with Rozier.

“What can I say? I said it was cool because I believed in what I was doing but later he came back saying that he wanted to move fully to the camp of Rozier.

“I said wow, when did you have this change of heart.

“I cannot suppress his decision so I asked him to consider what people will say because,they know where I came from with him and what we were pushing for but he would not budge.

“Finally I told him that I would like to be assistant to Rozier since we could be both upgrade together but he told me that he wanted his privacy.

“How can a human being talk like this,” he said”

Lokko confirmed that he has lost contact with Commey since their fallout back in 2017.