Barcelona must change their name if Messi leaves – Eto’o 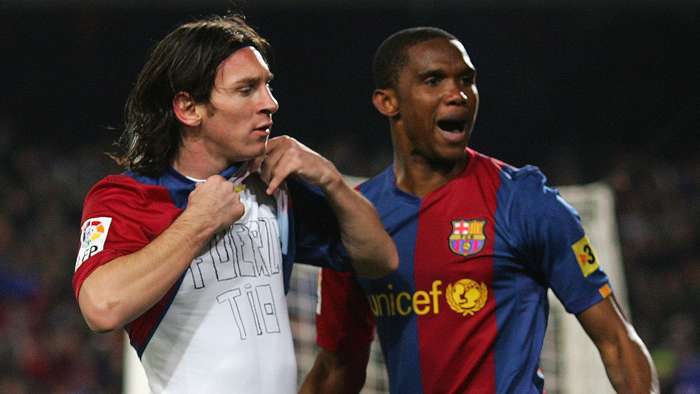 Former Barcelona and Cameroon striker Samuel Eto’o has joked that the Catalans will have to change their name should Lionel Messi depart the club.

The 33-year-old La Masia graduate, who is the most prolific player in the Blaugrana’s history, played for a full 90 minutes as they lost 8-2 to Bayern Munich in the quarter-finals of the Champions League last Friday.

It was Barca’s biggest European defeat in history and their heaviest loss since 1946. It was also the first time since the 2005-06 season that neither Messi nor Juventus star Cristiano Ronaldo made it to the semi-finals.

This has fuelled speculation on Messi’s future at the club, with a year left to run on his contract, and he has been linked with a possible move to Manchester City to be with his former coach in Pep Guardiola or his Argentine hometown club Newell’s Old Boys, where he featured as a youth player.

“I love Messi like he was my own son, I want the best for him. Barcelona is Messi and I think if Messi decides to leave, we’ll have to change the name of the club,” Eto’o told Argentine TV channel TyCSports.

“We are lucky in that at Barcelona, we have the best player in the world and of all-time, we have to do everything possible to ensure he finishes his career at Barcelona.”

Eto’o asserts that Barcelona are having a tough time because some of the new recruits are struggling to adapt. He also insists pressure needs to be put on the club hierarchy so the right decisions to put the club forward can be made.

“The players who arrived had difficulty adapting,” he continued.

“I want Barcelona to get up and dream for next season. And finally, he put some pressure on the leadership. I hope that those who make decisions, make decisions for the good of Barcelona.”

Meanwhile, the 39-year-old Cameroonian revealed he would have loved to play for Argentine giants Boca Juniors during his career like his countryman Alphonse Tchami did between 1994 and 1997.

“I would have liked to play for Boca, like Tchami, who I followed as a child,” Eto’o said.

“Boca has made us all dream, it is one of the best clubs in the history of soccer. I would have liked to experience the atmosphere of the Bombonera. It is unique.”

Thanks for believing in me – Bernard Mensah to Besiktas