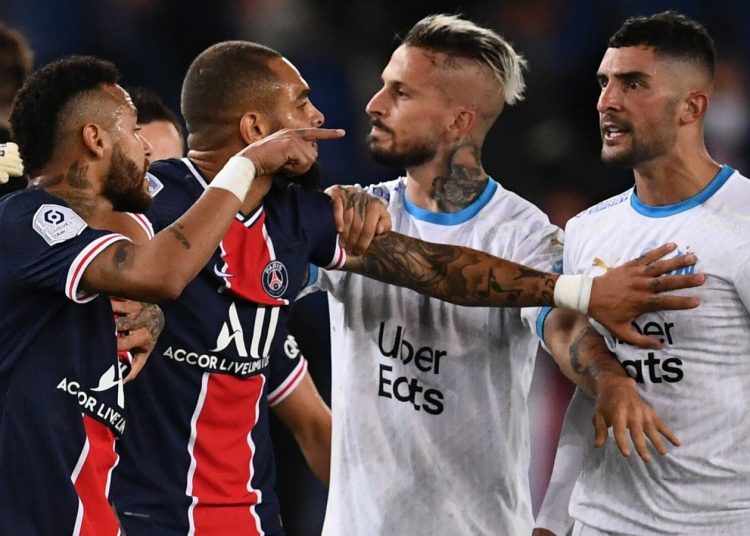 Neymar claimed he was subjected to racist abuse after he was sent off for striking an opponent in the back of the head as tempers flared during Paris Saint-Germain’s 1-0 loss in Le Classique on Sunday.

A full-scale brawl broke out on the pitch in the last minute of stoppage time, forcing referee Jerome Brisard to send off PSG’s Laywin Kurzawa and Leandro Paredes as well as Marseille’s duo of Dario Benedetto and Jordan Amavi.

Neymar was then also sent off for striking Alvaro Gonzalez in the back of the head, having had several incidents with the Spanish defender previously in the game.

On leaving the pitch, Neymar was heard by pitchside microphones claiming to one of the match officials he was racially abused on the pitch.

Neymar tweeted after the game, saying his “only regret” was not hitting Marseille defender Gonzalez in the face.

He later posted: “It’s easy for VAR to capture my aggression. Now I want to see it capture the footage of the racist calling me a monkey son of a b****. That’s what I want to see!

“I do tricks and I get punished. A tap on the head and I get sent off. What about them?”

Did you see the FIVE RED CARDS handed out in the PSG-Marseille game this morning? Even Neymar got the chop! pic.twitter.com/co5rVNuldN

Gonzalez strenuously denied the accusation on Twitter, insisting there is “no place for racism” and he has had a “clean career”.

In a reply to Gonzalez’s tweet, Neymar wrote: “You’re not man enough to own up to your mistake, losing is part of the sport. Insulting and bringing racism into our lives isn’t.

“I can’t agree with that. I DON’T RESPECT YOU! YOU HAVE NO CHARACTER! Own up to what you say my brother … be a MAN! RACIST.”

Earlier, Thauvin scored against the run of play, steering in a Dimitri Payet free-kick inside the near post from close range after the home side had come close through Marco Verratti and Neymar, who also missed a pair of chances in the second half.

Littered by crunching fouls at either end in the first half, the game produced some free-flowing football after the break as visiting keeper Steve Mandanda pulled off several superb saves and both sides had goals disallowed for offside.

Angel Di Maria’s effort for PSG was ruled out in the 62nd minute and Marseille substitute Benedetto’s scorcher was also scrapped two minutes later as Thauvin, who unleashed the initial shot, was marginally behind the last PSG defender.

PSG, who missed several first-team regulars who had contracted coronavirus, pressed hard in the closing stages but Marseille’s rugged defence held firm as the 1993 European Cup winners made it two wins out of two.