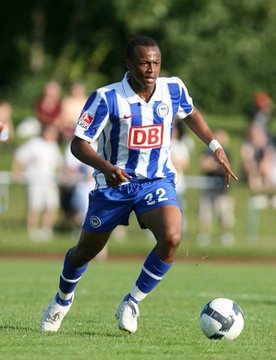 Ghana captain Andre Ayew is a distinguished footballer who has played for some very high profile football clubs around Europe.

At Olympique Marseille where he started out, he won two French League Cup titles and a French Super Cup crown.

He became Swansea City’s best player in only his first season with the Swans in the Premier League which earned him a big money move to West Ham United.

Throw in a loan move to Turkish giants Fernabahce, and the 30 year old would have played in France, England and Turkey.

But before all the pump and pageantry, the Swansea deputy captain was just like any other player, scrambling for a decent club.

Back in 2009, Dede was already a full international, having played for Ghana at the 2008 AFCON and having already led Ghana’s U-20 to a World Cup crown. But it did his reputation nothing in the eyes of many clubs in Europe.

Young Andre Ayew on trials at Hertha Berlin in 2009 pic.twitter.com/9O8I7LLlK1

While still on the books of Marseille, Ayew was shipped around on loan, first to Lorient for the 2008/2009 season and then to Arles-Avignon for the 2009/2010 season.

But it has now emerged that Ayew went on trials in Germany with Hertha Berlin before ending up at Arles-Avignon.

It is unclear however, if he was rejected by the club or he opted to go a different way.