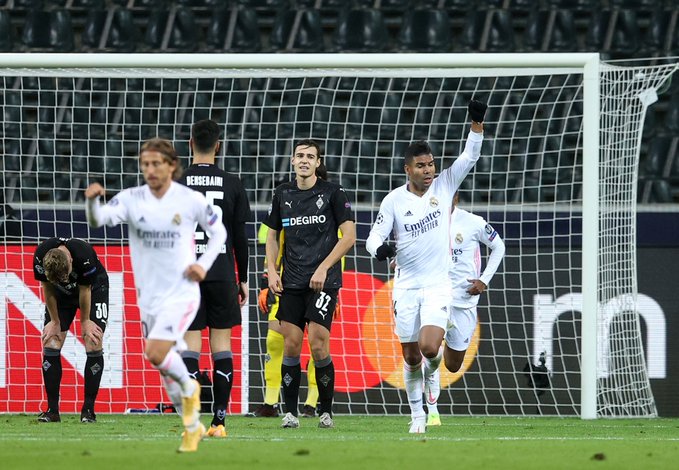 Thirteen-time European champions Real were 2-0 down in the 87th minute before goals from Karim Benzema and Casemiro saw them earn a thrilling draw.

Monchengladbach’s Marcus Thuram scored with a fine finish from Alassane Plea’s pass and added a second when Thibaut Courtois could only parry Plea’s shot.

Monchengladbach, playing in the group stages of the Champions League for only their third campaign, were heading top of Group B until Real’s late double.

The hosts had chances to kill the game off when they lead 2-0 as Plea could have added a third when he broke clear of the visiting defence but was denied a one-on-one chance with Courtois.

Lars Stindl also shot narrowly wide for Monchengladbach, who have drawn both of their group matches 2-2 after a similar scoreline away at Inter Milan last week.

Real have one point from their two games after a shock 3-2 opening defeat by Ukrainian side Shakhtar Donetsk, who top the group.

“For me, this draw is not a relief, it’s a deserved result,” said Real coach Zinedine Zidane.

“We had an opponent who had us in trouble on two or three occasions, but we didn’t panic and came back with character.

“If we continue to play like that, we’ll do great things and we’ll win matches, that’s for sure.”

Spanish champions Real were only seconds away from setting an unwanted club record as they were on the verge of losing four consecutive European matches for the first time in their history – including both legs of last season’s last-16 defeat by Manchester City and the game against Shakhtar.

Since that loss, Real beat Barcelona 3-1 at the Nou Camp in El Clasico on Saturday and would have been confident of defeating a Monchengladbach side sixth in the German Bundesliga.