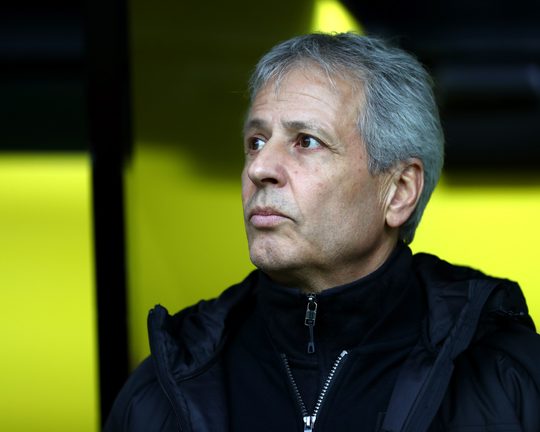 DORTMUND, GERMANY - DECEMBER 01: Lucien Favre, Manager of Borussia Dortmund looks on prior to the Bundesliga match between Borussia Dortmund and Sport-Club Freiburg at Signal Iduna Park on December 1, 2018 in Dortmund, Germany. (Photo by Lars Baron/Bongarts/Getty Images)

Borussia Dortmund have relieved head coach Lucien Favre of his duties in the wake of Matchday 11’s 5-1 home loss to promoted VfB Stuttgart.

Despite qualifying for the UEFA Champions League knockout roundsas Group F winners, Dortmund are five points behind Bundesliga leaders Bayern Munich after 11 rounds of fixtures, following a run of one win in five.

The heavy reverse to Stuttgart, meanwhile, means BVB have now suffered three successive defeats at home in the Bundesliga for the first time since the 2013/14 season, when Jürgen Klopp was in charge.

Assistant coach Edin Terzic has been appointed on an interim basis until the end of the current campaign.

“It was a tough decision for us to take,” admitted Dortmund sporting director Michael Zorc of Favre’s dismissal. “At the same time, we felt we were in danger of not meeting our goals for the season after this difficult phase. That’s why we had to act.”

Favre, 63, leaves the Dortmund almost halfway into his third season at the helm. He oversaw 110 matches in all competitions, with Dortmund finishing as Bundesliga runners-up in 2018/19 and 2019/20, whilst winning the 2019 Supercup.

Dortmund face away games in the Bundesliga against Werder Bremen(15 December) and Union Berlin (18 Dec), before travelling to second-tier Eintracht Braunschweig in the DFB Cup second round, in their final competitive fixture of the calendar year (22 Dec).