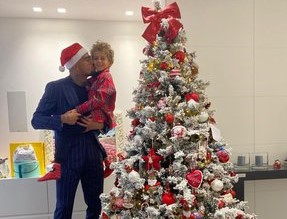 Ghanaian footballers around the world have taken to social media to celebrate Christmas with many sharing photographs to go with the yuletide.

Here is a collection of some of the posts from the players:

Prince Boateng, who recently announced he had split with wife Melissa Satta, celebrated the holidays with his son Maddox Prince.

Merry Christmas to everyone 🙏🙏💪💪 pic.twitter.com/83qCteqUU8

May our hearts and homes be filled with all the joys & blessings of the festive season. Have a wonderful Christmas!
🙏🏼🎉❤️🌟 pic.twitter.com/VacopLAi8f

France-born Strasbourg player Alexander Djiku decided to give away a signed Ghana jersey in the Christmas spirit following his international debut in October.

For my first Christmas as a Black Stars player, I decided to offer a signed jersey 🎅🏽✍️

The winner will be announced next thursday 🗓

🇬🇭 Good luck to everyone ! pic.twitter.com/ZVfhfYAKVc

Merry Christmas to you all .. +3 points pic.twitter.com/bYRyacXWlp