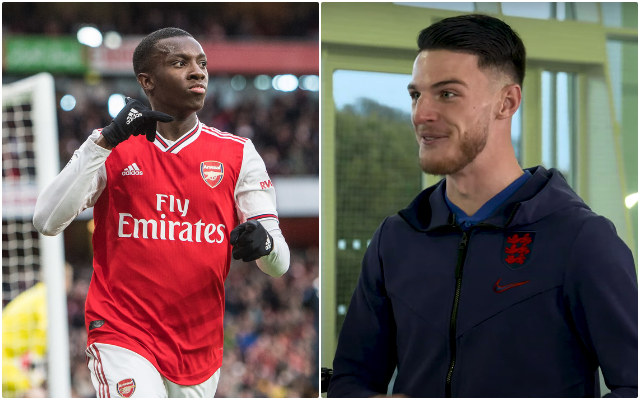 Although it may seem a distant memory to many, West Ham captain, Declan Rice recalled the time when his former teammate at the Chelsea Academy, Eddie Nketiah used to bring a box of Jollof rice to share among colleagues.

In the latest episode of ‘Winner Stays On’ for England, West Ham ace Declan Rice linked up with Chelsea star Ben Chilwell and presenter Josh Denzel to decide which country’s food is the best.

With 16 nations in the tournament, Nigerian and Mexican food faced off in one of the opening rounds, which sparked Rice to share a wonderful story from his days with Arsenal ace Eddie Nketiah at Chelsea.

This may be a mix up on the part of England midfielder because Eddie Nketiah has routes in Ghana not from neighbouring country, Nigeria.
As a matter of fact, the 21-year-old goal poacher is eligible to play for the Black Stars of Ghana despite featuring for the Young Lions of England at the various age groups.
Just like Declan Rice, Eddie Nketiah played for the Chelsea Academy between 2007 and 2015 before the club released them after not making the cut at the Blues.

Rice revealed that when he was travelling all over the country with Nketiah in Chelsea’s youth sides, the striker used to bring a massive dish of Jollof rice for all of his teammates to enjoy.

Jollof rice is one of Ghana’s iconic dishes, a delicacy that actually runs through the Sub-Saharan region, with Nigeria, Senegal and Liberia being countries who flaunt the meal.

Rice added that their entire Chelsea youth team would be ‘buzzing’ when Nketiah brought the goods, stating it was ‘so peng’ and ‘good’.