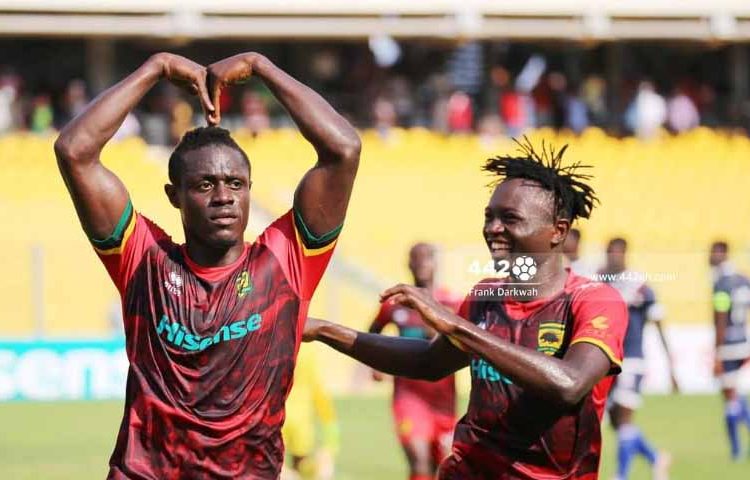 Asante Kotoko SC has been on the rise since the departure of Maxwell Konadu. Johnson Smith was appointed manager on a caretaker basis.

During Johnson Smith’s tenure, Kotoko has been knocked out of the CAF Champions League and are making steady progress in the league.

Some have attributed this mini-revival to the touch of Brazil and Nkoranza. Coach Johnson Smith has shown his stature in the Ghanaian game and continues to make progress at the helm.

Besides the obvious actors to Kotoko’s improved form, we assess Kotoko’s off-season business briefly, Johnson Smith’s tactical play since taking charge and their chances leading up to the Super 2 Clash.

Asante Kotoko showed their financial muscle and general appeal to players as they confirmed the acquisition of 10 new players at the beginning of the 20/21 Ghana Premier League (GPL) season.

Whilst confirming these purchases, a staggering 19 players were let go by the Porcupine Warriors. A worrying fact about all these departures is that the players did not command transfer fees.

The financial burden on the club now is being mitigated by substantial commercial revenue from partnerships and sponsorships. However, these sponsorships are not enough for a professional club like Kotoko.

The revenue streams have been expanded and hopefully, Kotoko can achieve this.

With the departures, a good match up was made by the technical team by identifying suitable replacements in the midfield and striking departments.

However, the main shortfall was the inability to sign enough wide midfielders in their pre-season recruitment. As a result, Asante Kotoko have been not been the force most of the league have expected them to be.

The likes of Maxwell Baakoh, Sogne Yacouba, Justice Blay and Matthew Anim Cudjoe being allowed to leave without a fight for their signature was expected to affect Asante Kotoko’s attacking unit.

The defensive unit remained untouched largely except the addition of Yusif Mubarik, Patrick Asmah and Razak Abalora; who are all seasoned professionals with the mentality to improve the squad.

With a squad size, marginally below the 30-man limit prescribed by the Ghana Football Association (GFA), it is a great worry Kotoko’s squad may suffer from burnout as they are still participating in the CAF Confederation Cup and GPL.

Johnson Smith’s tenure has been relatively short yet has yielded some important results to lift Asante Kotoko from the relegation zone of the league to midtable obscurity.

Whilst Kotoko is yet to experience the feeling of being in the top 4 this season, they have been able to secure important results under Johnson Smith. 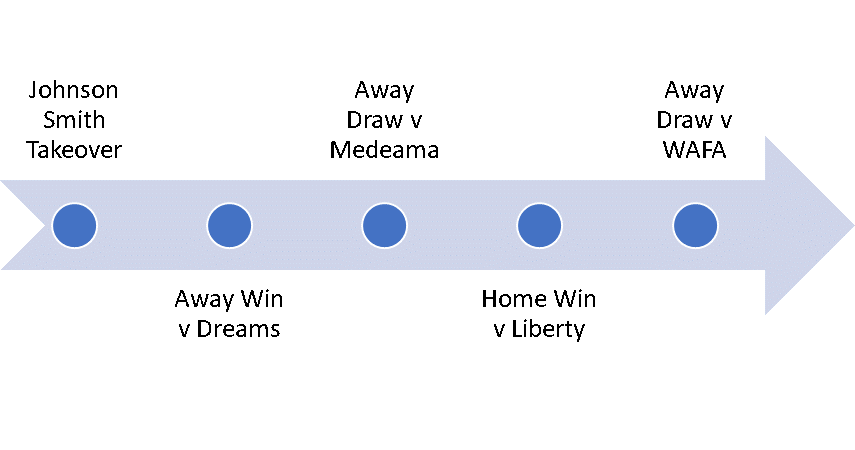 There is a feel-good factor at Kotoko, and they feel more confident that a spot in the top 4 in within reach upon their recent performances.

Failing to record defeats against Medeama Sporting Club and West African Football Academy (WAFA), Johnson Smith has chalked feats at two grounds Asante Kotoko had previously won only 2 in each of their last 9 visits to either ground.

Johnson Smith has employed a variety of systems and called upon 3 different tactics since tacking over.

In all these approaches, Johnson Smith has trusted Razak Abalora, Abdul Ganiyu, Imoro Ibrahim and Kwame Opoku by giving each of them starting berths in all these games barring Ganiyu (v Dreams).

Johnson Smith’s Kotoko has also been rather low in the level of engagement. They tend to allow teams to build up with the ball into the end of the middle 3rd of the pitch before Kotoko will then pressurize them into errors.

For a team set up to play that way, they have been lacking for electric pace in their last two games and as such cannot spring into quality counterattacks.

The transitioning from defence into the attack has also been awfully slow with Asante Kotoko players taking too many touches in their half before attempting to penetrate the opponent’s half.

There are also vast amounts of spaces in between the Kotoko midfield which has allowed some teams to pick them apart very easily and even isolated Kotoko defenders very well.

Johnson Smith must ensure spaces between his midfielders between the midfield cog and defence are filled.

He must plug all holes to prevent Kotoko from being exploited as regularly as we have seen.

An exciting highlight of Johnson Smith’s Kotoko is the use of two out and out strikers sometimes. He has found a way to occupy opponents’ defenses with William Opoku Mensah and recently Naby Keita joining Kwame Opoku up top. This is ambitious from Smith and shows he is ready to risk for higher reward; that’s what any Kotoko manager should be looking to do.

The goal distribution across the squad since Johnson’s arrival must improve. 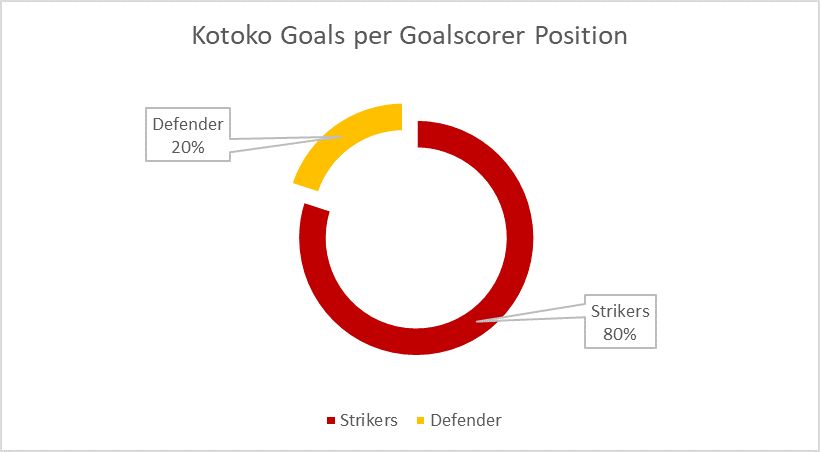 The current ratio indicates Opoku is Kotoko’s main outlet and Smith’s style of play means every attack will end at the feet of Opoku. 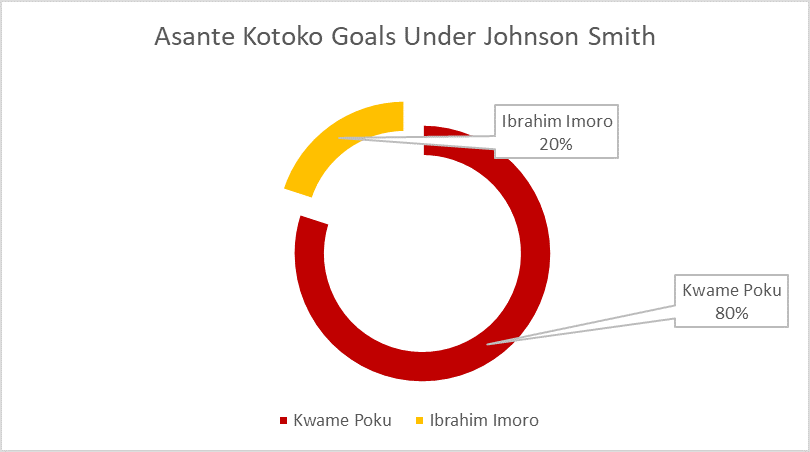 The burden and pressure are on Kwame Opoku and that needs to change if Kotoko will stand a chance at competing for any laurels this season. The contribution from only Imoro Ibrahim would have meant Kotoko’s last 4 goals are all from the same source.

The stars of Kotoko’s mini-revival can easily be an effective 5-aside team. 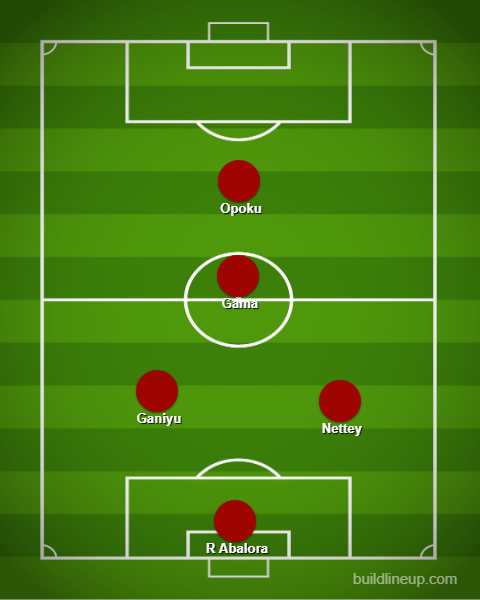 The ex-WAFA keeper has been excellent in the sticks since deputizing for Felix Annan. He has been an audible presence and made stunning saves to secure Kotoko draws at Medeama and his old stomping ground, WAFA. He makes the team tick because he oozes confidence and is quite the presence at the back. 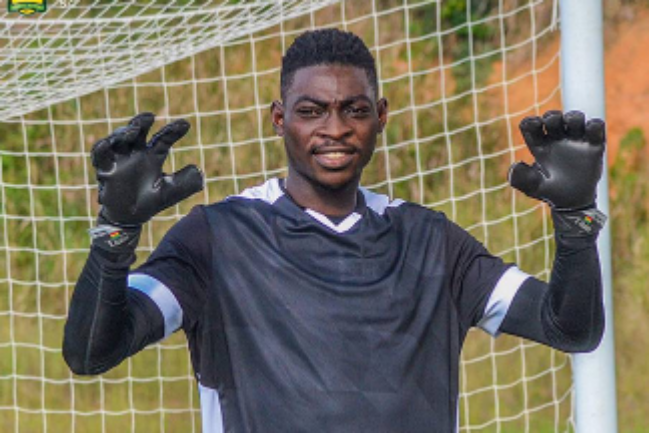 An ever-present under Johnson Smith, Ganiyu has quietly gone about his business as if he were playing for a lower placed club. His calm presence and ability to sense danger even before it presents itself have been an asset in this relatively easy to attack Kotoko side. Ganiyu’s experience is an open influence on how Kotoko’s backline has set up lately and will continue to push the club to greater heights.

Fresh from his Black Stars debut, Nettey has been an excellent outlet going forward to Kotoko under Johnson Smith. His pace and power have been essential in the way Kotoko transition when they break up opponents’ attacks. His ability to play in numerous roles also has been a blessing for Kotoko so far. However, his delivery into the box has fallen short of the standard expected of him but regardless, he makes opponents shiver in their boots once he gets on the ball.

The man from Ribeira do Pombal has taken to the GPL like a duck to water. The physicality of the league has been something he is getting used to, but Fabio has already provided an assist in 3 appearances. 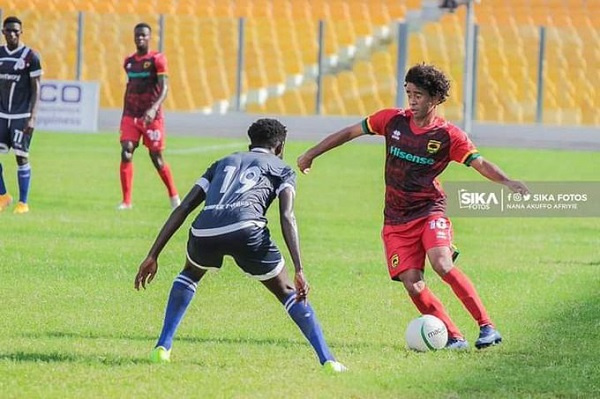 He has been started beautiful moves for Kotoko in his few minutes so far, but he would be better suited to a role as an out-and-out number 10; similar to Juan Mata in Chelsea’s PL winning season.

As he has excellent technique, he is easily bullied and by that would be best suited to be further away from his box. He has shown an eye for goal and arrived late in the to power a header straight at Liberty goalkeeper in his first start.

A second striker or attacking playmaker role will allow Kotoko to enjoy the man from Brazil a lot more.

Following his exploits in the Ghana Normalisation Committee Special Competition, Kwame Opoku has also adapted very quickly to life in the GPL. He’s scored 4 in his 4 under Johnson Smith.

Kwame Opoku has shown an understanding of the role he’s deployed in. His sheer power, physical presence, pace and intelligent movements make him very difficult to defend against.

At this current trend, it would be no surprise if he scores again at Dwarfs on Wednesday. He would be buoyed by his performances and potentially a wildcard for CK in the next AFCON qualifier.

Build Up to Super 2 Clash

A potential points total of 8 out of 15 in the next 5 fixtures will be a decent return to keep Kotoko in the hunt for continental football. Any slip-ups could force Asante Kotoko to dip back into the transfer market to strengthen their squad as well as hire another manager. This is crunch time for Johnson Smith, he passes this test, he can be assured he will be the man to lead them against Accra Hearts of Oak.