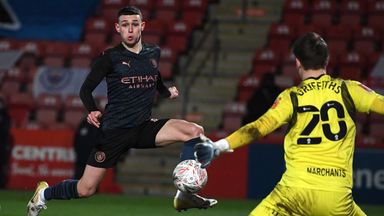 Manchester City were nine minutes away from being dumped out of the FA Cup by League Two Cheltenham but late goals saved their bacon as they rallied to earn a 3-1 win.

Longshots are regularly seen in this part of the world with Cheltenham racecourse just a mile away from the Jonny-Rocks Stadium and Michael Duff’s team almost created another one when Alfie May prodded them ahead (59) against a team 72 places above them in the league pyramid.

It looked to be one of those nights in the famous competition as City squandered chances but with just nine minutes to go Phil Foden drew City level (81) before Gabriel Jesus ended the possibility of extra-time with another close-range finish (84).

Ferran Torres added an unfair gloss to the scoreline in added time (90+3) as this was a night all about the work-rate, quality and defensive brilliance from the League Two side.