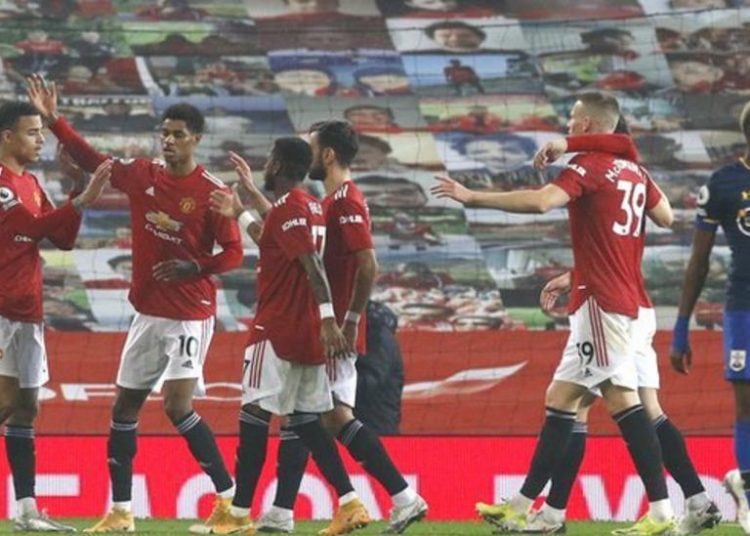 Manchester United hit NINE past Southampton in a record-equalling victory at Old Trafford on Tuesday evening.

Southampton teenager Alex Jankewitz was dealt his marching orders after just TWO MINUTES and Jan Bednarek was also dismissed as the Saints were thrashed in an Old Trafford blitz.

Jankewitz, who emerged through the Saints’ academy, became just the FOURTH player to be sent off inside two minutes of a Premier League matchfollowing his rash challenge on Scott McTominay.

It was the worst possible start for Ralph Hasenhuttl’s side, who have been plagued with injuries to several key players in recent weeks.

And United produced a masterclass in attacking to inflict Southampton their second 9-0 defeat in as many seasons.

Former Saints left-back Luke Shaw sent in a fine cross from the left and Aaron Wan-Bissaka directed home at the far post to open the scoring.

The Red Devils doubled their lead less than seven minutes later after Marcus Rashford latched onto Mason Greenwood’s cross to net his 15th goal of the season.

United made it 3-0 in the 34th minute as Rashford’s cross from the right was turned into his own goal by Bednarek as Fred and Mason Greenwood loitered at the far post.

Solskjaer’s showed no let up and Shaw crossed for Edinson Cavani – the match-winner when these sides met in November – to head home for 4-0.

Saints thought they had pulled one back through Che Adams, only to be denied by a narrow VAR offside call.

The visitors had done well to stem the flow in the second half but Bruno Fernandes opened them up in the 69th minute. Substitute Anthony Martial was the recipient of his pass and he impressively shook off Bednarek before firing the roof of the net.

McTominay quickly made it six as Jack Stephens hooked clear, only for the midfielder to hammer home from distance.

Southampton’s misery was compounded further when Bednarek was sent off following a VAR review to make it 11 men vs nine.

The Pole was adjudged to have made no attempt to play the ball after bringing down Martial in the area and Fernandes slotted home his 11th goal of the season with aplomb.

Martial hit United’s EIGHTH of the night moments after with a finish from close range from Aaron Wan-Bissaka’s cross before Daniel James completed the rout with the ninth.