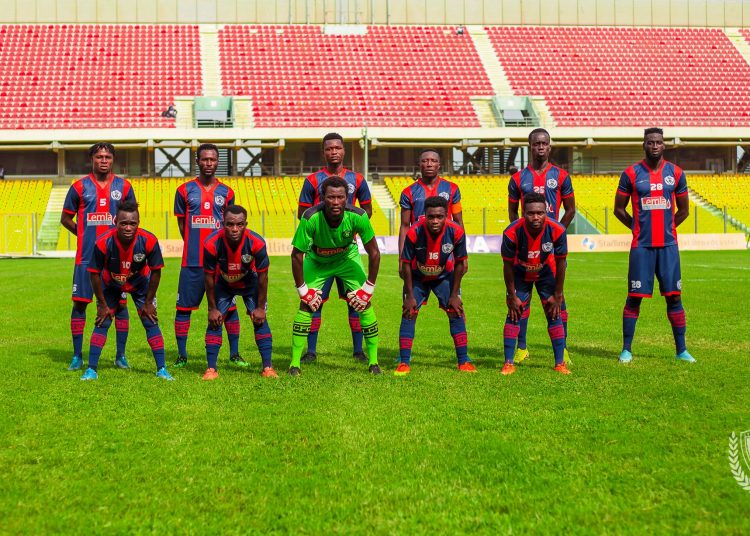 Kwadwo Obeng Junior’s late strike was enough to snatch a 1-1 draw for Hearts of Oak with Legon Cities in Match Week 13 of the Ghana Premier League on Sunday at the Accra Sports Stadium.

Hearts of Oak, who were without a win in three matches, showed determination to end that unwanted run by probing for the initiative.

Obeng Junior went close to fetching the opener in the 4th minute with a low shot but that went wide.

The Phobians had another chance to go ahead in the 4th minute but Patrick Razak failed to tap home into an empty net.

After failing to cope with the high pressure tactics by Hearts of Oak, it was Legon Cities FC who drew the first blood through Jonah Attuquaye.

Hearts of Oak were given a huge opportunity to open the scoring in the 16th minute after referee Joseph Padi Kenny whistled for a penalty but Umar Manaf placed his shot wide.

The forward was released on the half way line by midfielder Nasiru Moro and he raced clear of Nuru Sulley before slotting his initial shot between the legs of goalkeeper Richard Attah and the rebound fell kindly on his path and he took the second bite of the cherry with aplomb.

Hearts of Oak took charge of the game there on, creating lots of chances with Razak and Manaf going close.

The Phobians believed they had the equalizer through Obeng Jnr’s header but goalkeeper Winfred Honu stretched at length to parry the ball into corner.

Hearts of Oak continued from where they left off in the opening half but couldn’t create enough chances to trouble the visitors.

Obeng Jnr sent shock waves across the stadium after blasting his shot into the sky when he had the goal at his mercy via a wonderful work by Umar Manaf.

Hearts kept probing for the equalizer but the steady defense of Legon Cities FC thwarted their efforts.

Benjamin Afutu, who replaced Frederick Ansah Botchway at half time, had the opportunity to put the hosts level  but couldn’t control his header as the ball flew just wide.

The Phobians looked to be heading for another defeat but Obeng Junior popped up with a late equalizer in the 86th minute.

The lanky striker exhibited calmness in front of goal to latch onto a heading pass by Manaf, but much credit to Raddy Ovouka whose powerful whip set up the goal.

The result leaves Hearts of Oak in 11th place with 17 points, with Legon Cities FC sitting 15th spot with 14 points from 13 games.