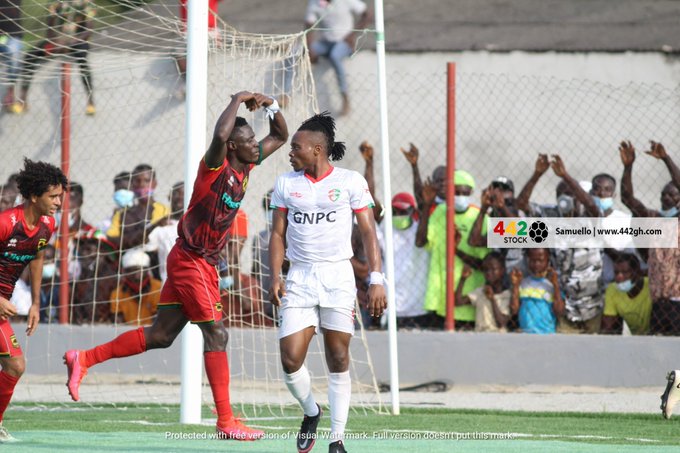 Asante Kotoko claimed top spot in the Ghana Premier League from Karela United after an impressive 2-0 win over over the Aiyinase-based side on Sunday.

Goals from left back Moro Ibrahim and striker Kwame Poku ended Karela’s unbeaten home run at the CAM Park that stretches back 2016.

Poku’s 2nd half strike was his 5th goal of the season and the Porcupine Warriors remain the only team yet to lose a game away from home.

Karela, who started the as league leaders, slip to 3rd on the log  following the defeat, one point behind Kotoko.

Clinton Duodu, Hafiz Konkoni and Moro Salifu all found the back of the net for Kweku Danso’s men before Charles Danso scored an injury time equalizer for Great Olympics.

Bechem move to second with the win while Olympics slip down to 5th following the defeat.

Aduana Stars moved into the top 4 with a narrow 1-0 win over academy boys WAFA in Dormaa.

Midfielder Emmanuel Osei Baffour scored the only goal of the game for the two time champions.

In Obuasi, Liberty Professionals shocked Ashantigold with a 1-0 victory to inflict more misery on the struggling Miners.

Ashantigold are now without a win in their last 5 games, while the victory was only Liberty’s 3rd of the season.

Joseph Esso opened the scoring for the Dawu-based side just before halftime. Suleiman Farhadu added the second on the hour mark to wrap up the win. Dreams are now unbeaten in 7 games in the Ghana Premier League.

In Saturday’s game, Ebusua Dwarfs handed Inter Allies their 6th straight defeat in the Ghana Premier League with a 2-0 win in Accra.