Ghana U-17 lose to Morocco in international friendly 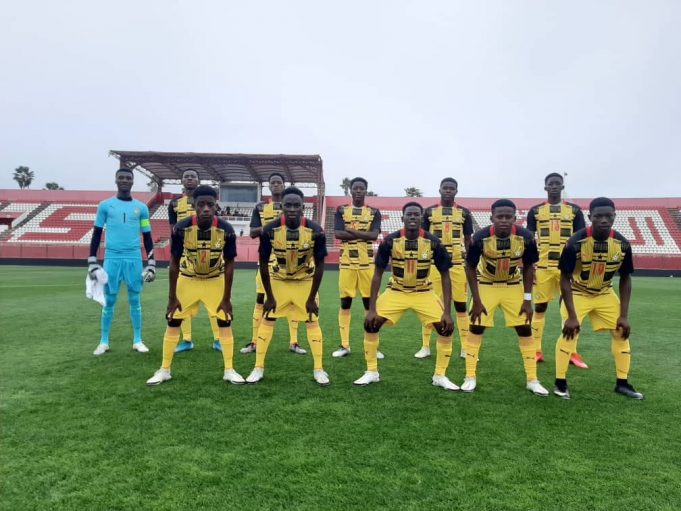 0
SHARES
17
VIEWS
Share on FacebookShare on TwitterShare via Whatsapp

The Black Starlets of Ghana suffered a 2-1 defeat to their Moroccan counterparts at the Prince Moulay Hassan Stadium in Rabat on Monday in a friendly encounter.

Two first half goals from the Moroccans was reduced by Ghana in the second half in a game that was dominated by each side in different halves.

Playing under a weather condition of 14°C, the Moroccans forced their visitors to concede two early goals in the first half before warming themselves up into the game.

An eleventh minute strike from Mesousa broke the virginity of the game before Yassine added the second for the home side seven minutes later.

Mesousa out-jumped his markers to connect from a corner kick, Ghana goalie Sylvester Antwi swiftly blocked the ball with a collapse save but the Moroccan striker relentlessly tapped him the opener.

Before Ghana could settle and react to the opening goal, Yassine connected a beautiful curler from the edge of the penalty area to give the home side a 2-0 lead less than 20 minutes into the game.

Ben Forkuo and his charges revised their notes and started building up nicely and pressing the Moroccans for a goal before the break.

Tried as they could, Ghana pushed men forward but the Moroccans defended gallantly until the break.

Ghana returned from the break charged in a temperature that had reduced to 10°C to fight to reduce the tally and possible grab a draw before the final whistle.

The efforts of the Twinkle Twinkle Little Stars paid off when Jonas Naafo’s volley beat the Moroccan goalie to reduce the tally on the 60th minute.

Ghana kept pushing for the equalizer but the Moroccans resorted to fallen on the field to reduce the tempo of the game and to whist away some time.

Ben Forkuo made some changes to his side to keep the heat on the Moroccans but their efforts were not enough to fetch the equalizer.

The game ended 2-1 in favour of the home side with the second leg of the friendly set to be played on Thursday morning at the same venue.

The games form part of a partnership between Ghana and Morocco to accelerate the development of football in both countries.

Below is Ghana’s line up for the game: