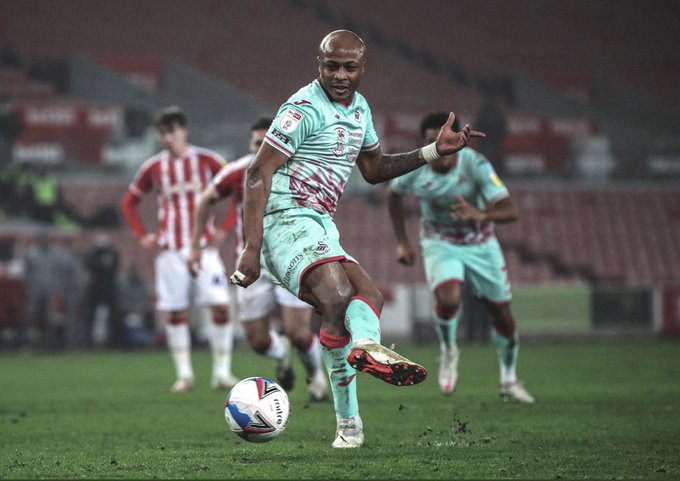 Swansea City manager, Steve Cooper, was very happy with the strength of character shown by Ghana captain, Andre Ayew, in the Swans’ latest win the English Championship on Wednesday.

Ayew scored a 95th minute penalty to give Cooper’s men all three points at the Bet365 Stadium in an important comeback win at Stoke City.

Swansea City fell behind in the 6th minute to a Nick Powell goal but Conor Roberts and Andre Ayew gave the visitors the win to move them up to 4th on the Championship league table.

After the match, Cooper said he was impressed with Ayew’s control and calmness especially as he needed to score the 95th minute penalty that won the tie.

“If the penalty goes in, then you can say that he (Ayew) is cool and he has the experience and you are hoping that the ball goes and it did.

Ayew has complete control of those situations and he showed great composure and great quality.

He takes the penalties in his own way and it was enough to score and get us the points tonight.”

The goal was Ayew’s 11 of the Championship season and with 15 matches left in the season, he is expected to either match or better his tally of 16 that he recorded last season for Swansea City.

Swansea City face Middlesbrough on March 6 in Round 32 of the Championship.