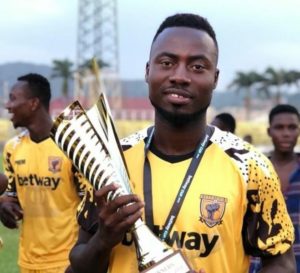 The experienced left-back has been unattached since leaving AshantiGold at the end of his two-year contract in September last year.

Joining Donkor at King Faisal is former Ghana U-20 star Seidu Salifu, who has also inked a deal until the end of the current campaign.

The 27 year old defensive midfielder, identified by his energetic displays for the Black Satellites at both the U-20 Afcon in Algeria and Turkey World Cup in 2013, has previously played for Wa All Stars (present-day Legon Cities), Tunisian side Club Africain as well as Adana Demirspor and Ümraniyespor, both in Turkey.

Caleb Amankwah to Hearts of Oak

The right-back left Aduana FC on a free last December after running down his three-year contract with the two-time Ghana Premier League winners.

the former WAFA SC stalwart is back home and sealed terms of a two-and-a-half-year contract with the Phobians on Friday. The deal will thus run through to the end of the 2022/23 season after failing to land deals in Turkey and Azerbaijan where he had trials.

DEAL REACHED!!! CALEB IS A PHOBIAN.

Accra Hearts of Oak has reached an agreement with highly rated Defender, Caleb Amankwah for two and half years.

The centre-back, despite making 10 appearances for leaders Karela United in the first round of the 2020/21 Ghana Premier League (GPL), was not handed an extension when his two-year contract ended this month.

Nurudeen has now signed a two-year deal with Aduana.

The two-time Ghana Premier League champions confirmed the capture of the 23-year-old Friday:

Nurudeen Abdulai joined Karela as a forward from AshantiGold in 2018 but was converted into a centre-back due to his physique by then-coach Johnson Smith who is now with Asante Kotoko.