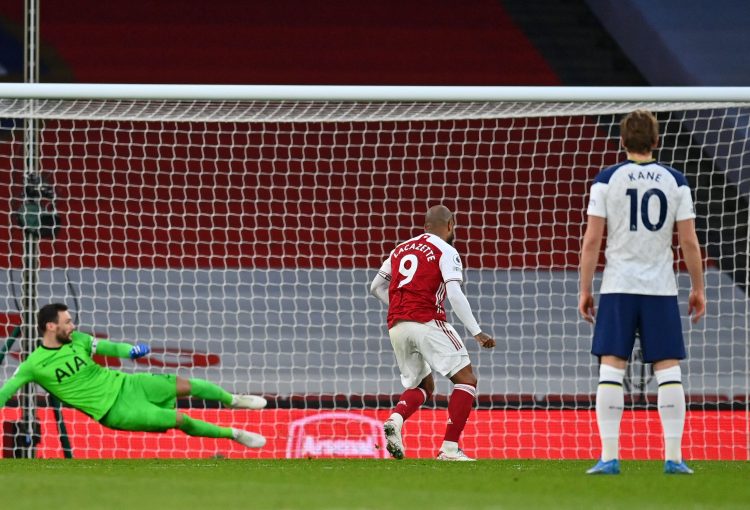 Erik Lamela went from hero to zero in Tottenham’s 2-1 defeat to Arsenal on Sunday.

The Argentina playmaker, who had come on as a first-half substitution for the injured Heung-min Son, opened the scoring for Spurs with an outrageous rabona goal in the 33rd minute at the Emirates.

However, following goals from Martin Odegaard and Alexandre Lacazette, Lamela let his frustration get the better of him when he picked up a second yellow card for appearing to hit Kieran Tierney in the face with 14 minutes remaining.

The result inflicted a first north London derby defeat on Jose Mourinho as Tottenham boss as his side suffered a big blow in their pursuit for a top four spot.

Spurs are six points below fourth-placed Chelsea as Arsenal closed the gap on their north London rivals to four points.

Emile Smith Rowe sent the first warning of the match when he struck the crossbar from 20 yards in the 16th minute.

Lacazette was leading the line for Arsenal in place of Pierre-Emerick Aubameyang, who was dropped to the bench for reportedly arriving late for the north London derby.

And the Frenchman fluffed his lines with his first chance of the contest when he sliced wide following a cut-back from Tierney.

Lamela’s moment of brilliance came when he scored his second rabona goal in a Tottenham shirt.

It was his first goal against Arsenal on his 250th appearance for Tottenham, which also ended a run of 36 Premier League games without scoring.

Gareth Bale’s switch of play found Sergio Reguilon, who picked out Lucas Moura in the box.

The Brazilian did well to lay the ball off to Lamela, who netted superbly from 12 yards, before wheeling off in celebration with a dumbfounded Reguilon.

Arsenal tried to hit back immediately as Cedric Soares hit the post.

And the Gunners did get their equaliser a minute before half-time as Odegaard’s deflected shot from a Tierney cut-back beat Hugo Lloris.

The second-half had been evenly balanced before Davinson Sanchez clumsily fouled Lacazette inside the box as referee Michael Oliver pointed straight to the spot.

Lacazette, who was the Arsenal captain for the day, sent Lloris the wrong way to give Mikel Arteta’s men a crucial lead.

Lamela went for an early bath to make Tottenham’s task of finding an equaliser even harder.

But Tottenham almost found that elusive leveler as Harry Kane had a goal ruled out for offside with seven minutes to go.

And Kane came close again when his long-range free-kick struck a post in the 90th minute, before Sanchez saw his goal-bound shot headed away by Gabriel.