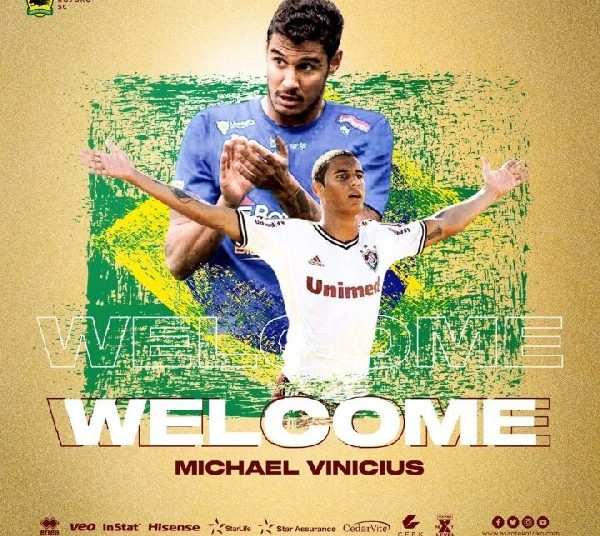 The club made the news public on Wednesday morning via its official Twitter handle. Apart from the length of the contract, Kotoko did not give other details of the move.

The Brazilian forward formerly of Fluminense (Brazil) , Linkoping City and Vasalunds IF (Sweden) joins us on a two-and-a-half year deal 📝https://t.co/HFqNI1A6Mo#AKSC #MichaelVinicius pic.twitter.com/8s2GXT1hu1

Vinicius becomes the second Brazilian to sign for Kotoko this season after midfielder Fabio Gama joined the Porcupine Warriors.

Vinicius joins Kotoko after stints in Brazil with Fluminense, Criciuma, Atletico Mineiro, Resende and Cascavel CR,  Estoril in Portugal and Linkoping City and Vasalund both in Sweden.

He becomes Kotoko’s second signing in two days after they announced the capture of former Karela forward, Solomon Sarfo Taylor.

Here are some highlights of Michael Vinicius:

Why Vinicius and Sarfo Taylor?

Kotoko’s decision to sign these two forwards points to the club’s intention to address their goal scoring problems. The team scored only 13 goals in 17 first round matches in the Ghana Premier League and seven of those were scored by Kwame Opoku who has now left for USM Algers.

The need to get in more forwards was very obvious and head coach Abdul Gazale will hope that Vinicius and Taylor can find the net on very regular basis to fuel any ambition of winning the league title.