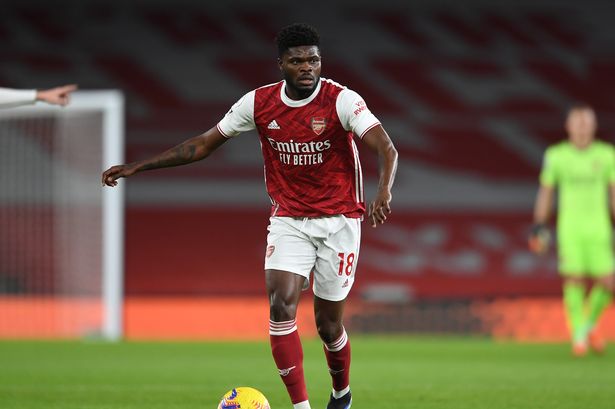 Arsenal tasted victory in the North London derby for the first time since December 2018 on Sunday afternoon, defeating Tottenham Hotspur 2-1 at the Emirates Stadium.

After falling behind to Erik Lamela’s exquisite opener, Arsenal turned the game on its head thanks to goals either side of half-time from Martin Odegaard and Alexandre Lacazette.

Odegaard, scoring for the second game in succession, found the back of the net just before half time when he connected with Kieran Tierney’s cross from the left flank, before Lacazette netted a penalty after being brought down by Spurs centre-back Davinson Sanchez inside the penalty area.

Although the Gunners were forced to come from behind, they deserved the victory over the course of the 90 minutes, which they eventually secured by playing the final 14 minutes with an extra man, after Lamela was sent-off for a second yellow card for the visitors.

The Gunners did dictate the majority of the game, restricting the likes of Gareth Bale and Harry Kane to very few clear-cut chances.

As well as keeping those two quiet, Arsenal also ensured they won the central-midfield battle as well, with Thomas Partey and Granit Xhaka stopping Frenchman Tanguy Ndombele from pulling the strings in the heart of Spurs’ midfield.

The former Lyon man was largely restricted to what he could do in an attempt to get Jose Mourinho’s side up the pitch and into attacking areas. That is largely down to Partey, who produced a solid performance, with his strength and aggression proving dominant.

And his performance was heavily praised by former Arsenal man Gilberto Silva following the full-time whistle, insisting he is the best defensive-midfielder he has seen don a Gunners shirt since he left the club back in 2008.

The Brazilian, when asked if he thought Partey was the best defensive-midfielder he has seen at the Emirates Stadium in recent years, told Astro SuperSport: “I guess so. In my opinion, I agree with you.

“He’s a good player. He’s the type of player Arsenal were missing, I’ve spoken a couple of times about it.

“They have good players in the [central midfield] position but not to sit and give Arsenal the stability they have.

“That’s okay, it’s fine, because you have to understand that. But this guy, when he understands the position like Partey, look at his game: he made the others a lot better.

“He makes Xhaka look better in the game, he made the defenders look a lot better and comfortable when the ball was against them.

“I think the way he manages games, the way he positions himself, is very important for Arsenal. He is the kind of player Arsenal have needed for quite a long time in my opinion.”

The Brazilian is not alone in suggesting that Partey will be an important player for the Gunners, as former Manchester United midfielder Roy Keane made a similar admission back in January.

Following the Gunners’ goalless draw with United at the Emirates Stadium, Keane waxed lyrical about Partey’s qualities and backed him to become a “big player” for the Gunners.

Keane told Sky Sports: “He came in on transfer deadline day, so he never got quite up to speed, so it wasn’t a surprise that he got injured.

“He’s going to be a big player for Arsenal over the next few years. His track record… he’s used to playing in the biggest games, we know the important role in the middle of the park for Arsenal, they’ve lacked the physical presence.

Sign up to our Arsenal newsletter for the latest transfer news

By signing up for our Arsenal newsletter, you will receive a once-daily email, focused around goings-on at Emirates Stadium.

You won’t miss a thing when it comes to the Gunners – you’ll get all you need to know directly into your inbox.

We’ll also send out special newsletters with any big breaking news too.

And with the January transfer window now open there’s plenty of content to get your teeth into.

Since joining the Gunners from Atletico Madrid back in October, the Ghana international has experienced an up and down campaign, suffering terribly bad luck on the injury front.

In total, the midfield enforcer has only made 18 appearances for the Gunners this term, a figure which is a lot lower than what he would have hoped for at this stage.