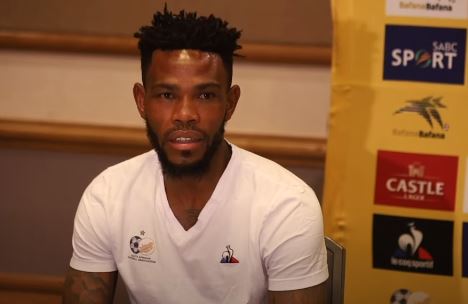 Bafana Bafana captain, Thulasi Hlatshwayo, has underscored the importance of the team’s match against the Black Stars of Ghana in the ongoing AFCON 2021 Qualifiers in Johannesburg on Thursday.

South Africa and Ghana are tied on 9 points and they meet in round five of the qualifiers and a victory for either side will send them closer to the next AFCON which will be played in Cameroon.

Speaking on Monday ahead of the match, South Africa captain, Thulasi Hlatshwayo, stressed the need for the team get a good result in the clash with the Black Stars and put themselves in a good position to qualify for the tournament ahead of the final match in the series against Sudan on March 28.

“We obviously know how important these final matches are especially the one with Ghana to whom we lost in the first round.

It is key that we get a result because we do not want to be in the same situation we were in when we were trying to qualify for AFCON 2019.

At that time, we had to leave it to the end against Libya before qualifying. So, we have to get a good result against Ghana and head to Sudan knowing that we will qualify.”

Hlatshwayo’s team mate, goalkeeper, Ronwen Williams stated the need to keep their unbeaten run at home in the qualifiers intact and so, Bafana Bafana had to get the win against Ghana on Thursday.

“We know what is at stake and at the beginning of the qualifying journey, the coach asked us what we wanted to achieve and we said we wanted to top the group.

That is the challenge that lies ahead of us so far, so good. We also said we wanted to be unbeaten at home and so far, it’s been good. We have won two out of two and we want to keep that momentum going into the Ghana game.”