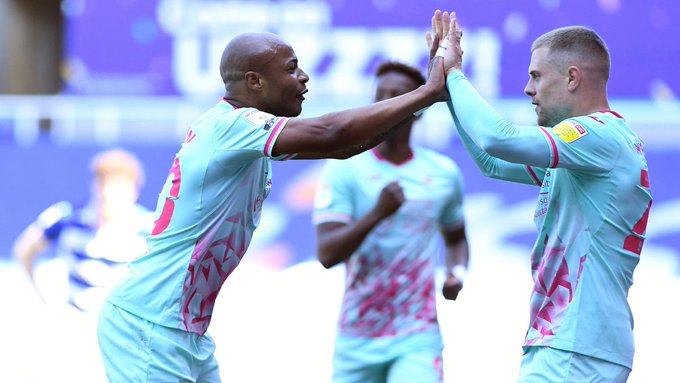 Ghana forward, Andre Ayew, has expressed his joy at being in the mix for a place in next season’s Premier League campaign after Swansea City booked their place in the Championship playoffs over the weekend.

Swansea City drew 2-2 with Reading on Sunday to give them 77 points after 44 matches played.

The result ensured 5th place on the league table and a place in the playoffs together with Brentford, Bournemouth and Barnsley.

One of these four teams will eventually win a place in the 2021/2022 Premier League season and Ayew is very happy with the chance Swansea has to make it to the highest level of English football.

He shared his thoughts with Swansea City’s official website after the draw on Sunday and added that he and his team mates would have to very prepared for the task ahead.

“I am very happy we are in the play-offs. That was the objective at the start of the season, and we need to keep going and get ready for the play-offs.

“There is a chance to build momentum and finish higher in the table. We will keep going.

“It’s great to be in the play-offs a few weeks before because we can really get ready for what’s coming. We need to use that to our advantage.”

Swansea City manager, Steve Cooper, spoke of Ayew’s impact on the result as the Ghanaian came off the bench to get the team 2-1 up at a point in the match.

Cooper admitted that he would have rather kept Ayew on the bench to aid his recovery from an injury he picked up against Wycombe Wanderers but the situation in the match demanded Ayew’s intervention and he was happy to have the Ghanaian around as an option.

“On Andre, it would have been great, if we had not needed him but that did not happen. We needed him and we knew he was medically clear to play about 30 minutes.

In the end, it ended up being a good move and I commend the medical team for their good work and Andre for his commitment.”

Swansea finish off their Championship season with matches against Derby County (home) on May 1 and Premier League-bound Watford (away) and May 8.