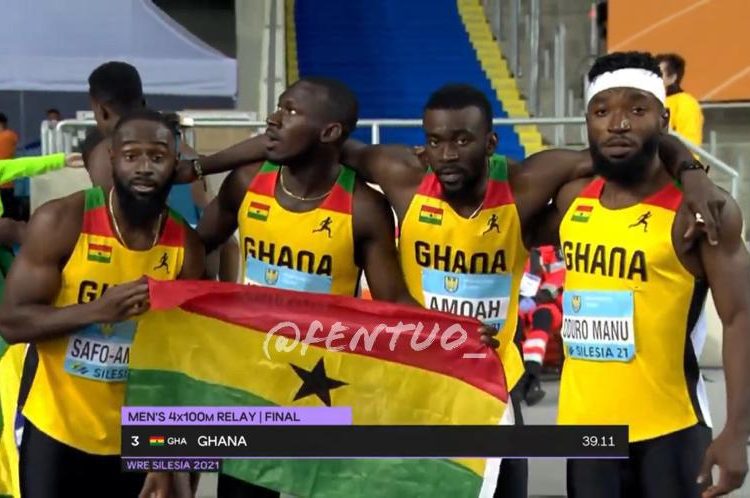 The Ghana 4x100m men’s relay team were disqualified for lane violation in the finals of the World Relays on Sunday night.

Ghana had finished 3rd (39.11) to clinch the bronze medal but were later disqualified after replayed showed that Joseph Manu, who ran the 3rd leg, received the baton from Benjamin Azamati outside the changeover zone.

This disqualification will however not affect their ticket to the Tokyo Olympic Games, and the 2022 World Championships in Oregon, USA, which were secured once they made the final.

What they will miss out on is the $10,000 that the 3rd place came with along with the bronze medals.

Brazil, who finished second in the same race were also disqualified for the same offence.

A storming anchor leg from Akani Simbine gives South Africa the victory in the men’s 4x100m. They clock 38.71 to win by 0.01 from 2019 winners Brazil but the Brazilians were later disqualified.

With the second and third place teams DQed, Italy and Japan, who finished 4th and 5th respectively, got promoted to 2nd and 3rd.

Members of the team will now head back to their various destinations to continue preparations for the Olympic Games which are just two months away.