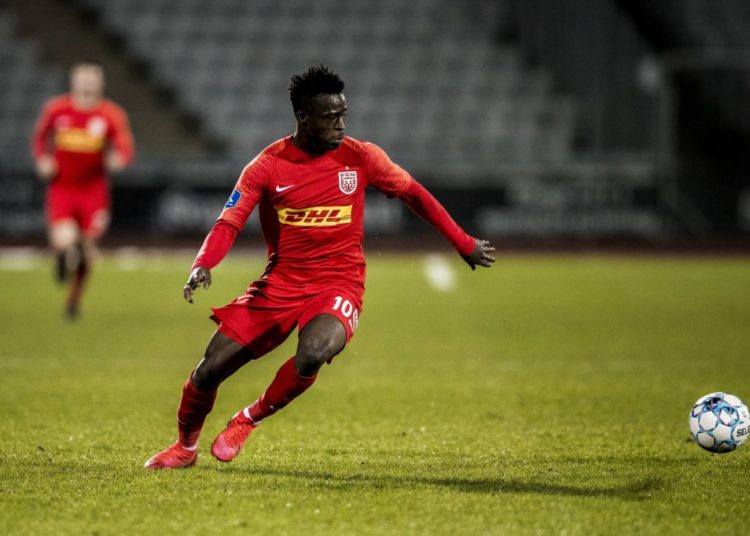 Nordsjaelland attacker and Ajax target Kamaldeen Sulemana has revealed he will want to pursue a new challenge this summer as he confirmed interest from Manchester United and Bayer Leverkusen.

The 19-year-old has become target of transfer discussions following a run of fine performances in the Danish Superliga.

On Monday, with Ajax director of football affairs Marc Overmars in the stands, the winger was on target as FCN held Copenhagen to a 2-2 draw.

“My agent heard from both of them,” Kamaldeen told reporters after Monday’s game when asked if he had offers from Manchester United and Bayer Leverkusen.

“I just want to play for a very good club, I want to play in the Champions League, I want to have playing time in the next team I go. And every other club that can give me that, I’d love to go.

“Right now, I’m just trying my best to channel my vision here and focus on my task here at FC Nordsjaelland because I have not finished. I have got few more games to finish.

“After that, I have a vacation, and the [transfer] window is not [yet] open, so that’s where I can really put my focus to say clubs and [start] talking to clubs. I haven’t personally spoken to any club because I am more focused on doing my job here. “

Monday’s strike has taken Kamaldeen’s goal tally in the league to 10, having also contributed three assists.

Olympique Lyon and Club Brugge have also been said to be interested in the services of the teenager, for whom Ajax reportedly had a first bid of €9 million turned down in January.

“Yeah, I personally feel ready to leave but then if there’s no right bid and negotiations don’t go well, then I’m still happy to stay here,” the winger said when asked if he prefers to leave FCN this summer.

“I’ve got a lot to learn. I still believe I can learn a lot here. [FCN head coach] Flemming [Pedersen] is helping me a lot and I learn [from] him every day.

“This league, you play against some very good players and it’s also a competition, so I like it here [at FCN] and I still think I can improve a lot.”

According to reports, Ajax are asking for €14 million for their prized Ghanaian asset.