The Coppa Italia Final will see Atalanta take on Juventus on Wednesday 19 May. It is the last opportunity for Cristiano Ronaldo to win a trophy this season. But it won’t be easy against Atalanta that sealed their spot in the Champions League for a third consecutive season. 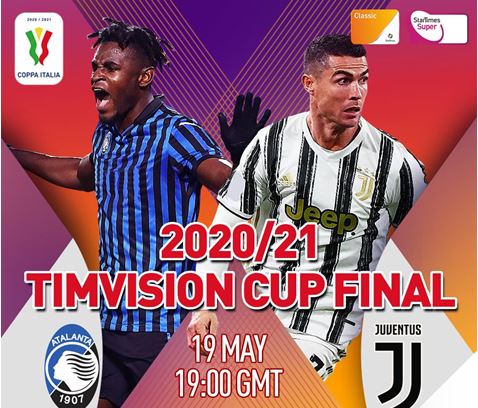 Juventus’ fans have been spoilt for a long time.

The last time La Vecchia Signora failed to win a trophy was in 2011. Since then, Juventus has won the Scudetto nine times in a row. They have also added a few Coppa Italia titles during that time.

This season, however, things have been very different. The league was lost early on as Inter Milan proved too big a hurdle to overcome and European football came to an end with a defeat against Porto in the first knock-out round.

On Wednesday Juventus fans will be hoping their team can provide some silverware to the trophy cabinet this year, with a victory against Atalanta in the Coppa Italia final which will be played in the Mapei Stadium – Città del Tricolore in Reggio Emilia.

Both teams go into the match on the back of impressive league matches.

Juventus beat champions Inter Milan 3-2 though an unlikely brace from defender Juan Cuadrado and the more predictable and likely Cristiano Ronaldo goal, while Atalanta won a seven-goal thriller 4-3 in Genoa.

Juventus coach Andrea Pirlo, who only took over his former club last year, will be looking to win his first major trophy [he did win the one-match Super Coppa in January].

Victory for Juventus would also see star striker Cristiano Ronaldo emulate the success he had in Spain and England, where he won both league and cup competitions with Real Madrid and Manchester United respectively.

The Portuguese international is, of course, not the only star in a star-studded Juventus side, with defender Danilo and attacking players Federico Chiesa, Paulo Dybala and Álvaro Morata amongst the other stand-out players.

The final could be the farewell game for 43-year-old goalkeeper Gianluigi Buffon, who has announced that he will be leaving Juventus at the end of the season after having played for the club since 2001, with just a one-year break in France.

Pirlo, who is two years younger than Buffon, has been using the experienced goalkeeper in cup matches and will – no doubt – continue doing so in the final.

While Juventus have won the Coppa 13 times, victory on Wednesday for Atalanta would be just the second time they land the trophy, with the first triumph dating back to 1963.

Since taking over the Bergamo-based team in 2016, Gian Piero Gasperini has managed to build them into one of the strongest teams in Italy, with two third-place finishes in the last two Serie A seasons.

With a game to go, they are currently second and victory in their final match would ensure their best-ever finish.

Gasperini, who took the side to the final already in 2019, losing 2-0 to Lazio, said that they were now ready to win a trophy. “Winning a trophy would be a crowning moment for all we’ve done over the years.

“People say Atalanta don’t win, but a club like ours in the Champions League for three years in a row is something remarkable. A trophy would be the icing on the cake, but in my view we’re winners regardless.”

And next month, StarTimes will air all 51 matches of UEFA Euro 2020 live and in HD.