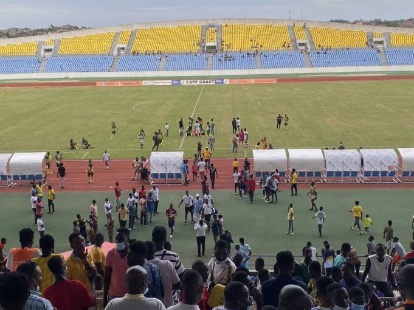 Legon Cities have been declared winners of their Ghana Premier League Matchday 23 game against Ebusua Dwarfs which ended abruptly.

The game was abandoned at half time after the referee Alpha Adey, his assistants and the match commissioner all failed to show up for the second half.

After waiting for close to two hours for the start of the second half, both teams retreated to the dressing room and the game never saw a conclusion.

According to the GFA statement, “Ebusua Dwarfs FC are responsible for initiating the acts responsible for causing the abrupt end of the match. Ebusua Dwarfs FC shall forfeit the match in accordance with Article 33(1)(b) of the GFA Premier League Regulations.
It must be noted that the Match Reports are presumed to be factual unless rebutted with clear.

Ebusua Dwarfs FC shall be considered as having lost the match in accordance with Articles 33(2) and 34(12) of the GFA Premier League Regulations and accordingly, three points and three (3) goals are hereby awarded in favour of Legon Cities FC.

Ebusua Dwarfs FC have also been fined Five Thousand Ghana Cedis (GH¢5000.00) payable to the GFA, 50% of which shall be paid to Legon Cities FC pursuant to Article 33(5)(b) of the GFA Premier League Regulations.

Also by being the defaulting club and being the Home Team, Ebusua Dwarfs FC have been ordered to pay an amount of One Thousand Ghana Cedis (GH¢1,000.00) payable to the GFA, which shall be paid to Legon Cities FC as their Transportation Cost as the Away Team pursuant to Article 33(5)(c) of the GFA Premier League Regulations.