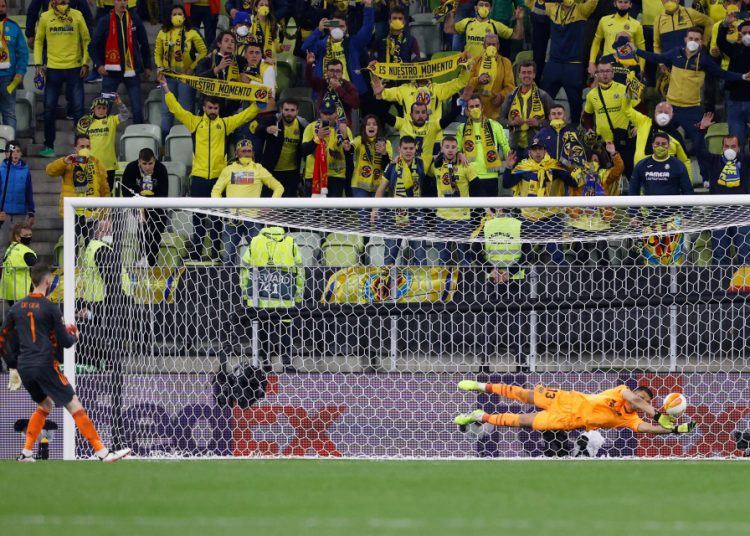 Bruno Fernandes was left in tears after David De Gea missed a crucial penalty in their shootout as Villarreal defeated Manchester United 11-10 on penalties after a 1-1 draw.

The Premier League side had the chance to secure the trophy, yet Marcus Rashford fluffed his lines when just nine yards from goal – a miss which will ‘give him nightmares’ according to former England international Dean Ashton.

Extra time passed without incident, with Villarreal growing in confidence, before every single outfield player stepped up and finished from 12 yards.

The responsibility fell to the goalkeepers and, after smashing the ball into the roof of the net, Geronimo Rulli leapt low to his left to keep out De Gea’s strike.

As the players of the ‘Yellow Submarine’ fell to their knees in celebration and Unai Emery prepared to lift his fourth Europa League trophy, the United squad were left wondering what if.

The lack of urgency from the players and Solskjaer himself – who made very few changes before the end of the 120 minutes – was somewhat baffling and ultimately cost the beleaguered and beaten fallen giants.

Villarreal clinched the lead when Edinson Cavani brought down Gerard Moreno after trying to track back and aid the defensive effort.

Yet the veteran Uruguayan gave away a free kick and Dani Parejo found Moreno in the box with a delicious free kick, which the Spaniard deftly prodded past compatriot David De Gea, yet Dean Ashton was not happy with the United defence.

“Luke Shaw I’m sorry, you have lost your man,” Ashton said on commentary duty for talkSPORT. “Lindelof doesn’t even turn around to see where the danger is!

“With those free kicks, it’s no good dropping without spotting a yellow shirt.

“Making sure you have a good body angle and making sure no one runs across you. In that sense, it was very, very poor defending.”

Ole Gunnar Solskjaer cut a frustrated figure on the touchline in Gdansk, well aware he had to summon the tactical nous to get his United team back in the game after falling behind.

And it was Cavani who made amends for his error, finding the back of the net yet again after Marcus Rashford’s volleyed effort fell to the striker inside the penalty area and he did the rest.

Unai Emery could sense the tide changing and threw on Francis Coquelin after just an hour for Carlos Bacca – perhaps an indication of his intentions to hold what he had.

Rashford had the opportunity to penalise that conservative substitution instantly, yet he somehow skewed his effort wide after a wonderful pass from Bruno Fernandes.

“That will give him nightmares,” he said. “The one thing I would say is the goalkeeper has done really well.

“It means Rashford has to make a decision – does he lift it over or go for the corner? He ends up hitting it with the bottom of the studs, a lack of concentration at a vital moment.”

It would have been the England international’s 100th goal for club and country since he burst onto the scene in this very same competition back in 2016 under Louis van Gaal.

Paul Pogba has a chance to potentially win the game, yet he fired a header way over the bar, which Ashton felt the World Cup winner should have done more with.

He said: “He just gets it all wrong; he tries to put too much power on it. He should be trying to glance it over, instead he just fires it over the top.”

The last Europa League final to go to extra time was in 2014, when a Sevilla side managed by Emery managed to defeat Benfica on penalties.

Solskjaer’s insistence to not utilise on his bench – even into the first half of extra time – appeared to be costing the Premier League side as Villarreal started to regain a foothold in the game against their leggy opponents.

The Norwegian decided to bring on Fred for Mason Greenwood in a move which seemed to make little sense, with their Spanish opponents growing in confidence as the game eked towards penalties.

As Emery gathered his Villarreal troops into a tight huddle before the start of the second half of extra time, it seemed as though there was a palpable sense of belief flooding through the LaLiga outfit.

Neither side did enough during a dour half an hour and the game went to a penalty shootout, with United having taken off Pogba during the second stanza.

“It’s an absolute nonsense because everyone is so scared,” Ashton remarked about extra time, with those in attendance in the rain in Gdansk unlikely to disagree.

After every single outfield player scored their penalty, it fell to the goalkeepers. Geronimo Rulli sent the ball into the top corner, before saving David De Gea’s spot kick to secure an incredible 11-10 win on penalties.

For the fourth time in his career, Emery has triumphed in this competition and Solskjaer’s trophy cabinet at Old Trafford remains vacant.