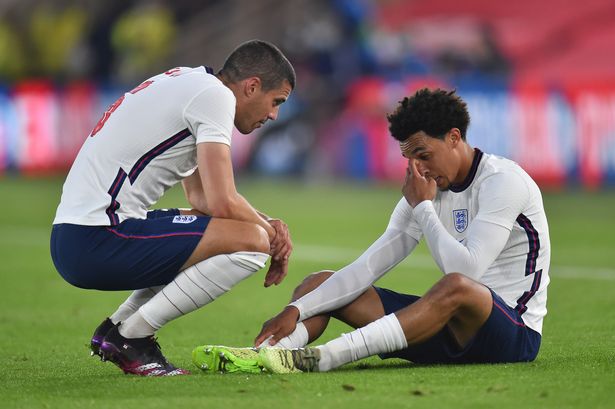 England’s Euro 2020 preparations got off to a winning start, with Bukayo Saka scoring his first international goal in a 1-0 victory for the hosts over Austria at the Riverside Stadium on Wednesday – although a late injury to Trent Alexander-Arnold caused concern.

Gareth Southgate was missing 11 Champions League and Europa League finalists for the first of two warm-up games in Middlesbrough but Arsenal’s 19-year-old ace Saka showed why he made the cut for the 26-man tournament squad by capping a positive display with a smart close-range finish on 57 minutes.

More importantly for England’s Euro 2020 plans, though, Alexander-Arnold limped off in the final moments after appearing to hurt his left thigh clearing the ball up the line.

The Liverpool right-back had fought his way back into the squad for the tournament after being left out of the March internationals but immediately signalled to be substituted and had to be helped as he hobbled back to the England dugout.

He had been one of several players to impress during the friendly against Austria, with Jordan Pickford, Jack Grealish, and 17-year-old Jude Bellingham also catching the eye.

England had understandably struggled to find their rhythm for periods through the game and Austria did rattle the woodwork in response to Saka’s strike, with Marcel Sabitzer forcing Pickford to tip his shot onto the bar.

However, they didn’t provide too stern a test for Conor Coady and Tyrone Mings, who are vying to start in England’s Euros opener against Croatia on June 13, should Harry Maguire not be fit in time.

Worryingly for Southgate, Alexander-Arnold may have given him another injury worry though, with the Three Lions’ second and final warm-up match against Romania on Sunday.