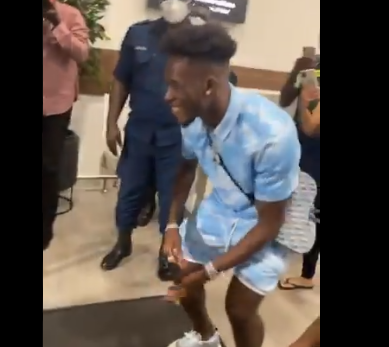 Hudson-Odoi, 20, was welcomed by an Adowa cultural group and the freshly crowned Champions League winner could not hold back and joined the troupe to show off some dance moves as he made his way out of the arrival hall of the Kotoka International Airport.

Hudson-Odoi showing off some cool dance moves on arrival in Ghana. Yeah, dancing like a Champions League winner 😅😅.

I should have organized some Chelsea fan group to go meet him with some jama but it's not too late.

Odoi was an unused substitute as Chelsea beat Manchester City 1-0 to win the UEFA Champions League on Saturday night.

Hudson-Odoi’s was born in the United Kingdom to Ghanaian parents; his father, Bismark Odoi, is a former Hearts of Oak player.

It is unclear if Hudson Odoi is just visiting family or he has other engagements in the country of his parents.