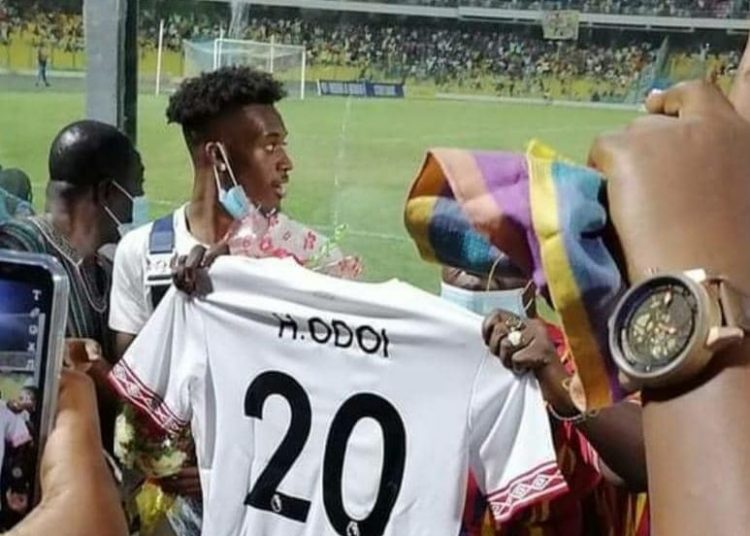 Highly-rated Chelsea forward Callum Hudson-Odoi was presented with a customized Hearts of Oak shirt during the Ga Mantse derby against Great Olympics on Sunday.

Hearts of Oak played as guests against their city rivals on match-day 28 of the Ghana Premier League at the Accra Sports Stadium.

The much-anticipated game ended 1-1 with Emmanuel Nettey and Maxwell Abbey Quaye scoring one goal apiece for their sides.

Chelsea star Callum Hudson-Odoi was in attendance at the Accra Sports Stadium to witness his maiden Ghana Premier League game.

The tricky winger was in the company of his father — Bismark Odoi — who donned the famous rainbow jersey during his footballing days.

The 20-year-old was given a customized Hearts of Oak Umbro jersey before the start of the match.

Hudson-Odoi’s dad grew up in the Accra suburb of Kokomlemle, sharing a 10-bedroom home with his siblings and mother.

He went to Accra High School before starting to play for Hearts of Oak around 1975.

Playing in midfield, Bismark was part of an attacking force known as the Fearsome Fivesome, helping the side to twice finish second in the African Cup of Champions Clubs.

Bismark scored in Hearts of Oak’s historic 2-1 win over rivals Kotoko, in Kumasi, in 1978.

The team won despite finishing with nine men – Bismark scoring the opener and Douglas netting the winner.

Meanwhile, Hudson was part of the Chelsea team that pipped Manchester City 1-0 in the UEFA Champions League final in Portugal a fortnight ago.

He was overlooked by England coach Gareth Southgate for the upcoming Euro 2020 tournament.

The London-born is still eligible to feature for the Black Stars of Ghana per the new FIFA eligibility rules for playing below age 21.