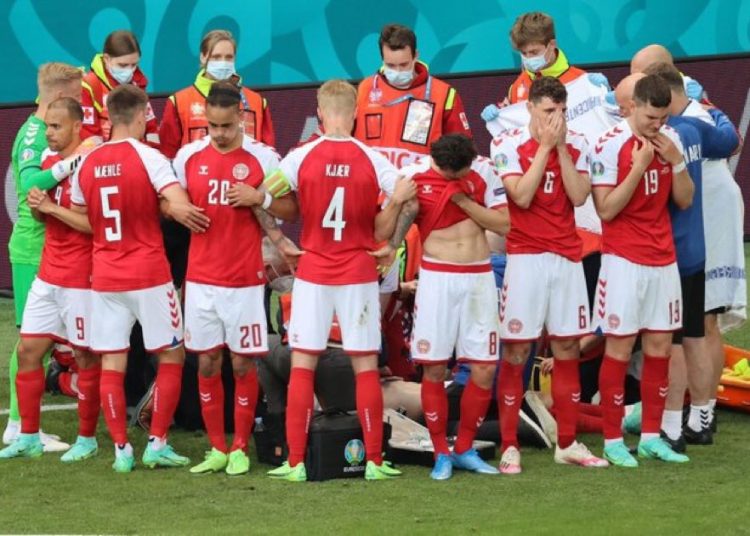 As one Danish newspaper put it: “Denmark lost. But life won.”

At the end of a night of huge emotion in Copenhagen, there was relief.

Relief that Christian Eriksen, who collapsed shortly before half-time in Denmark’s opening Euro 2020 game against Finland, was awake and “stable” in hospital.

And relief, too, that those around him acted with such speed. Speed that may well have saved the former Tottenham midfielder’s life.

We take a look at how players, medics and officials all played their part in helping Eriksen.

First on the scene – Simon Kjaer and Denmark’s players

Eriksen’s collapse as he attempted to receive a throw-in started a truly frightening spell at Copenhagen’s Parken Stadium.

Denmark’s captain Simon Kjaer was one of the first players on the scene and appeared to clear Eriksen’s airways.

The severity of the incident was apparent, and players from both teams urged the medical staff to hurry on.

As he was resuscitated, Eriksen’s anxious team-mates formed a protective ring around him, offering some privacy from the 15,200 fans in attendance and the millions watching on television.

Many of the players – the majority looking away – were in tears. Some appeared to pray.

Henry Winter, The Times’ chief football writer, told BBC Radio 5 Live: “If you know the Danish side these are not simply team-mates, people like Simon Kjaer and Kasper Schmeichel.

“They are friends and they responded to Christian Eriksen in his moment of need. Because of the substance of the men involved, they consoled Christian’s partner, who was distraught pitchside. We build players up and put them on a pedestal but they are humans like the rest of us.”

The 29-year-old Inter Milan player was eventually taken away on a stretcher and brought to hospital.

After the news finally came that Eriksen was awake, the game restarted, with Finland winning 1-0.

Medical staff – ‘We did what we had to do’

Sports cardiologist Professor Sanjay Sharma, who is chairman of the expert cardiology consensus panel for the Football Association, told the BBC “the thing that saved his life was very urgent and rapid medical attention”.

“It was clear he was unconscious,” he said.

“When I got to him he was on his side, he was breathing, I could feel a pulse, but suddenly that changed and we started to give him CPR.

“The help came really fast from the medical team and the rest of the staff with their co-operation, and we did what we had to do and managed to get Christian back. He spoke to me before he was taken to hospital.”

Fabrice Muamba suffered a cardiac arrest during a game for Bolton Wanderers in 2012. He recovered but never played again.

“It brought back stuff that I have put down in me, this emotion that is down there. To watch it from that distance and not know what was going to happen,” he told BBC Sport.

“It was scary, but credit to the medical staff. They have done an amazing job on Christian. I like how his team-mates got together to protect him. It brought back emotion that you don’t really want to see on the other side. I hope things turn out to be OK for him. I hope he will come through.”

Danish players were given two choices – to finish the game that night, or at noon the next day. After hearing Eriksen was OK, they decided to get it finished that evening.

The game restarted at 19:30 BST, almost two hours after Eriksen collapsed. The final five minutes of the first half were played before a five-minute break and then the second half.

Denmark head coach Kasper Hjulmand said: “The players could not imagine not being able to sleep tonight and to have to go on a bus tomorrow and play again. It was easier to go out and it was best to get it over with.

“It’s been a tough night. We are all reminded of what the most important thing in life is – to have valuable relationships, people we’re close to, our family and our friends.

“I couldn’t be prouder of those people who took such good care of each other. He is one of my very dear friends. The way the players talked in the dressing room to decide to not do anything before we knew Christian was conscious and OK.

“You can’t play a game with such feelings. We tried to win. It was incredible they managed to go out and try to play the second half.

“Honestly, there were players out there who were completely done. Emotionally done and emotionally exhausted.

“All of our thoughts and prayers are with Christian and his family. He is one of our best players and one of the best players out there, but he is an even better person.

“There are players who are completely emotionally exhausted. It was a traumatic experience. We talked about those feelings and it would’ve been OK to say ‘no’ if they didn’t want to play.

“Some of them were not able to play, some were ready. We just tried to do our best, but you can’t play a football game at this level. It’s not normal to play such a game when one of your friends is suffering with a heart issue. I cannot imagine playing a game like that. We are going to offer therapy sessions and there are people who will help us.”

When the game did resume, Schmeichel made an uncharacteristic mistake for the goal and Pierre-Emile Hojbjerg had a penalty saved. Eriksen would have normally been the penalty taker.

Fans play a role too

Most of those in attendance – a mix of Denmark and Finland fans as well as neutrals – stayed at the ground waiting for news, even when it appeared unlikely the game would continue.

They all gave the players a standing ovation as they came back onto the pitch to restart the game.

“The vast majority of fans stayed in the ground,” said former Scotland winger Pat Nevin on BBC Radio 5 Live. “They seemed like they just wanted to hear some news. When the latest update was released, there were tears of joy and relief.”

There was a key role in events for English referee Anthony Taylor, too.

The official, from Manchester, stopped play almost immediately and signalled for the medics to race on.

He then took the players down the tunnel as it became apparent the game was going to be suspended for some time.