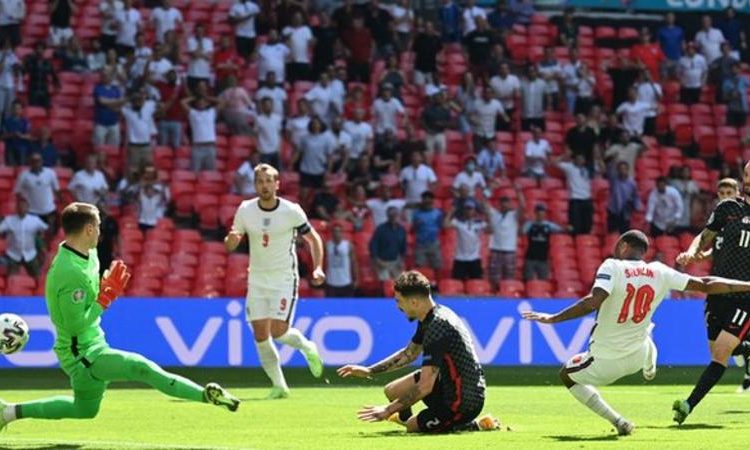 England’s Euro 2020 campaign got off to a winning start as Raheem Sterling’s goal secured victory over Croatia at Wembley.

Sterling repaid England manager Gareth Southgate’s faith in him, sliding in the winner after 57 minutes following a perfect pass from man-of-the-match Kalvin Phillips.

Southgate resisted the temptation to play Aston Villa’s Jack Grealish and was rewarded with a lively performance from Sterling as England secured the win their superiority deserved.

The Three Lions almost took an early lead when Phil Foden struck a post but there were the first signs of frustration from fans and players just as Sterling made the decisive contribution with his first goal in a major tournament.

Goalkeeper Jordan Pickford was barely tested by a disappointing Croatia side, who never looked like repeating their victory over England in the 2018 World Cup semi-final in Moscow – leaving England with three points to take into Friday’s second Group D game against Scotland at Wembley.

Leeds United’s Phillips has been branded ‘The Yorkshire Pirlo’ by his adoring fans at Elland Road. This was a performance all his own and one of the highest class.

From the first whistle, the 25-year-old was calm, creative and England’s most assured player both in the periods when they dominated and also when they lost impetus and suffered spells of frustration.

He tested Croatia keeper Dominik Livakovic early on but his most important contribution came with a run and pass that provided Sterling with the perfect opportunity to break Croatia’s resistance.

This was Phillips’ first game in a major tournament, one in which he was central to Southgate’s system alongside Declan Rice, but also with a heavy weight of responsibility as experienced Liverpool captain Jordan Henderson is still not considered fully match fit.

Phillips was often simply regarded as a holding midfield player in his early days but under the tutelage of manager Marco Bielsa at Leeds, and thanks to his own endeavours, he is now so much more.

It was a statement performance from Phillips and one that surely guarantees his place against Scotland next Friday.

There were genuine questions to be asked about Sterling’s place in England’s team for this opening game after a period of indifferent form when even Manchester City manager Pep Guardiola felt able to do without him as City won a third Premier League title in four years.

However, Southgate has never wavered for a second in his belief that Sterling is integral to his England plans so it was no surprise when he was selected – and he proceeded to show exactly why he is so highly regarded by his country’s management team.

He was a constant threat when England attacked in a potent trio with Foden and Mason Mount operating behind a very subdued Harry Kane.

Sterling had Croatia’s defenders on the back foot and it was fully merited when he stole into space in the penalty area to convert a perfect pass from Phillips.

He could have added a second late on but his finish was wayward. He still deserved the huge ovation he received when he was substitute for Dominic Calvert-Lewin in the closing moments.

Croatia arrived at Wembley with confidence bolstered by their record of important wins over England in the past, most notably that World Cup semi-final triumph in 2018.

Here, they looked a shadow of the impressively gifted side that performed so brilliantly in Russia and will be bitterly disappointed that they failed to give England keeper Pickford any serious moments of anxiety.

They survived a rocky opening period to restore a measure of order for the last 20 minutes of the first half, but even then their performance was more about possession and tempo than threat.

The visitors failed to build on that improved conclusion to the first period after the break, allowing England to regain the initiative and once Sterling scored this game never had any sense of a comeback from Zlatko Dalic’s side.

Croatia still have the great midfield manipulator Luka Modric but real quality is in shorter supply around him than it was and they will have to improve.