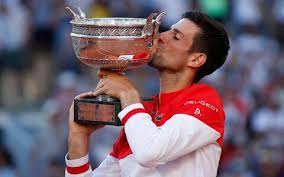 Novak Djokovic won his 19th Grand Slam title after fighting back from two sets down to beat Greece’s Stefanos Tsitsipas in the French Open final.

The victory moves Djokovic one major title behind the men’s record jointly held by Rafael Nadal and Roger Federer.

Djokovic, who previously won at Roland Garros in 2016, has become the first man to win all four Grand Slams twice since the fully professional Open era began in 1968.

The world number one will have the opportunity to move level on 20 titles with his great rivals Nadal and Federer when he defends his Wimbledon crown later this month.

After Tsitsipas saved one championship point with a nerveless forehand winner down the line, Djokovic remained calm to take his second attempt after four hours and 11 minutes with a clinical overhead.

His expression remained emotionless as he shook hands with Tsitsipas, before bursting into a manic roar in front of the area where his parents, wife Jelena and coach Marian Vajda were celebrating.

Tsitsipas was a picture of devastation as he slumped in his chair, draping his towel over his head to hide the full extent of his emotions.