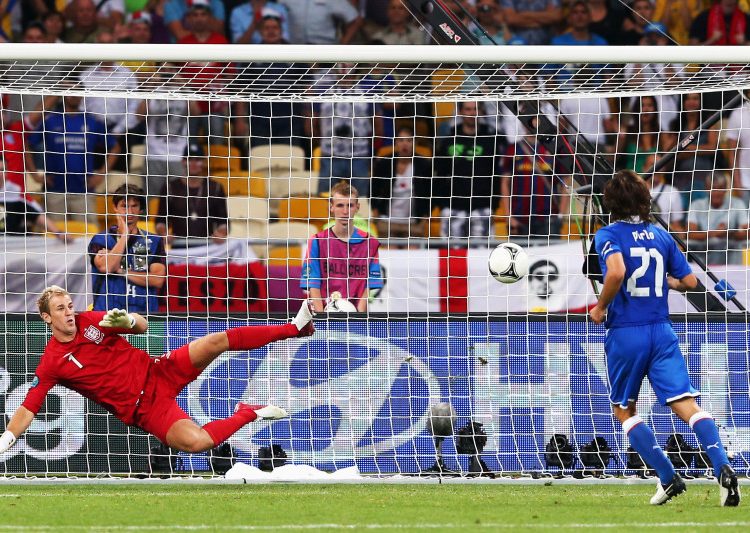 Andrea Pirlo is regarded as one of the best midfielders to ever play football.

His technical ability was second to none, his passing prowess was unmatched, and his guile, as he seemed to glide across the pitch, was a sight to behold.

The Italian maestro spent his whole career playing for some of the country’s best teams, including AC Milan and Juventus.

As such, Premier League fans in England did not have a full idea of what exactly Pirlo could do. That changed at Euro 2012 when England got a first-hand lesson in “Pirlo-nomics.”

He had already dominated matches against Croatia and the Republic of Ireland at the tournament, before their encounter with the Three Lions in the quarter-finals.

He was again at his imperious best, controlling the midfield and creating loads of chances that his teammates failed to convert.

With the match ultimately finishing goalless and heading to a penalty shootout, Pirlo stepped up for the Italians.

Joe Hart was in England’s goal, going through every single motion to try and put Pirlo off; jumping on the line, waving his arms, the works.

The Italian maestro made all of Hart’s antics look silly when he just dinked the ball right down the middle as the Englishman flung himself comically to his right.

Hart could only watch as the ball almost floated into the back of the net, seconds after he landed.

It was an ice-cold moment that all but sealed England’s fate; how could you not win after something like that?

The Italians won the shootout and eventually reached the final, losing to Spain.

On this day in 2012, Andrea Pirlo stepped up for Italy in a penalty shootout against England.

That Panenka was so cold ❄️