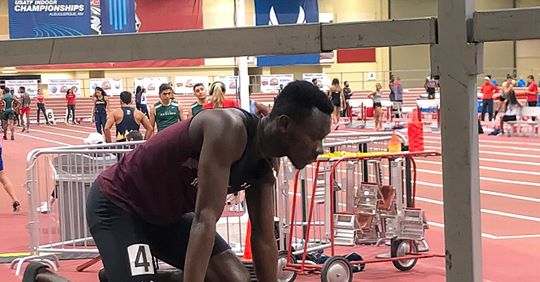 Ghanaian sprinter Benjamin Azamati has joined teammate Joseph Paul Amoah in opting out of one sprint event at the upcoming Tokyo Olympics.

Azamati has confirmed he will not run in the men’s 200m event and instead will focus on the 100m and the relays.

Earlier, Joe Paul took to twitter to announce his decision to pull out of the 100m event in order to focus on his ‘favorite’ 200m and the relays.

Azamati, 22, has been in hot form in the 100m this season setting a new national record (9.97s) in his first outdoor race of the season to qualify for the Tokyo Games.

He then helped the men’s 4x100m relay team qualify for the Olympics in Silesia, Poland at the end of May before following that up with another personal best in the 200m (20.13) to book his ticket in the half lap event but has now opted not to compete in the event.

“The decision we took for Azamati and Joe Paul to run one individual race each was influenced by the scheduling at the Tokyo Olympics.

“If they were to compete in the two events and qualify for the finals, which is likely looking at their times, they would have run about 8 races in the space of just 6 days coming into the start of the relays and that certainly would have meant they would be completely burnt out,” Andrew Owusu, head coach for Ghana’s athletics team explained in a press conference.

“So in order to preserve them and keep them fresh for the relays, we decided the best thing to do is have them run in one race each,” he said.

The Tokyo Olympics are set to begin on July 23.

Team Ghana’s athletics squad has been preparing in Baltimore, USA ahead of the games.