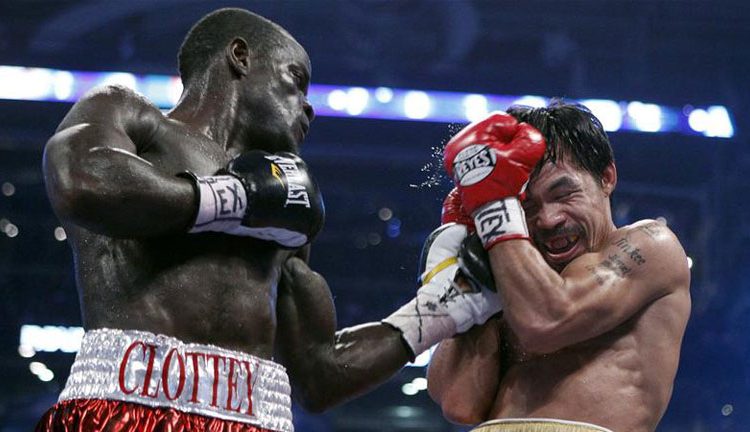 Former IBF Welterweight champion Joshua Clottey has declared his intention to fight Manny Pacquiao a second time if given the opportunity.

He says he is also willing to do it for free.

Clottey lost to Pacquiao in March 2010 via unanimous decision infront of a crowd of 36,000 capacity crowd at the Dallas Cowboys stadium.

According to Clottey, he was not in the right frame of mind during their first bout in 2010 due to some financial disagreements with his manager over the fight purse.

“The manager did not help us but he should have.

“He was getting 33 percent including the pay per view and made almost 1.9 million dollars from just that one fight.

“I told him to take just 25 percent of the fight as well as the pay per view and give me 8 percent out of your cut.

“He refused to do it and all these issues were weighing down on my mind.

He says given a second chance he will make amends.

“If I didn’t have all these issues going into the bout I would have been able to wear down Manny Pacquiao.

“He throws a lot of punches and with my blocking and hitting ability I would give him problems.

“If he will give me a fight today I will take it for no money.

“No money, no pay, absolutely zero I will fight him.

“It is because I want to restore my name.” he revealed on The Tracker on Citi TV.

Clottey last fought in 2019 against Aziiz Mpomda, a bout that resulted in a 9th round technical knockout victory.