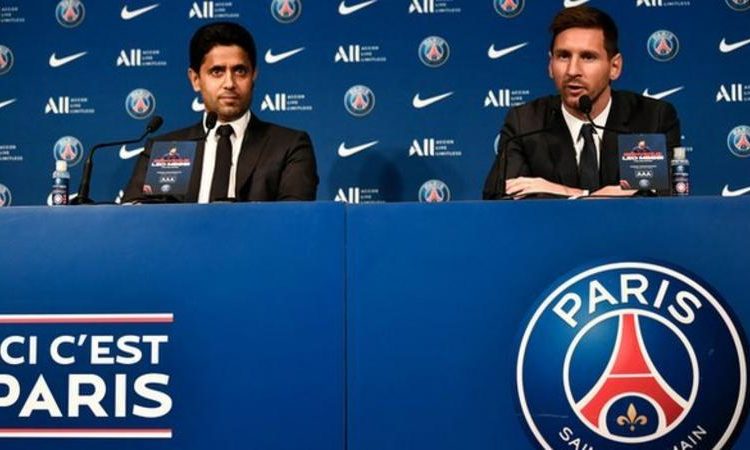 Lionel Messi said he dreams of winning the Champions League once more after joining Paris St-Germain, adding: “I think we have the team to do it here.”

The Argentina captain, 34, won four Champions League titles with Barcelona, the last of which came in 2015.

PSG are still searching for their first title in the competition, having lost to Bayern Munich in the 2020 final.

“My goal and my dream is to win the Champions League once more,” Messi said as he was unveiled as a PSG player.

Messi left Barcelona – who he joined aged 13 – as they were unable to afford a new deal under La Liga’s financial fair play rules.Considered one of the greatest players of all time, he scored a record 672 goals in 778 games for the Catalan giants.

He won the Ballon d’Or a record six times and lifted 35 trophies during his time at the Nou Camp, but said he is excited to “begin this new moment of my life” after a “difficult” departure from Barcelona.

“It was a difficult change after so long a time,” he told reporters at the Parc des Princes. “But the moment I arrived here, I felt very happy and I really want to begin the training sessions. I want it to be quick.

“My only will now is to begin the training sessions. I want to work with the staff and team-mates and begin this new moment of my life.

“I have this will to play. I am really impatient. I still want to win, as I did the first moment of my career.

“I feel this club is ready to fight for all the trophies. This is my goal, I want to keep growing and keep winning titles and that is why I came to this club.”

‘It would be nice to go back to Barcelona’

Adding Messi to an already talent-rich squad is a major step in PSG’s quest to reach the European summit.

After losing to Manchester City in last season’s semi-finals, the Parisians – who also lost their Ligue 1 crown to Lille last term – have recruited Champions League winners in Sergio Ramos, Georginio Wijnaldum and Messi.

However, Messi is aware that in order to lift the trophy for a fifth time, he may have to face Barcelona along the way, and admits that playing at the Nou Camp in PSG’s colours would be “very strange”.

“Barcelona is my home – I have been there since I was a kid and I’ve lived so many things there,” he added.

“I don’t know if we are going to face each other – it would be very nice to go back to Barcelona.

“It will be very strange to play at home there in Barcelona with another shirt but it can happen and we will see.”

‘We have the most competitive team in the world’

Messi’s arrival in the French capital completes one of the most formidable attacking lines in history. The South American is poised to play in PSG’s frontline alongside the two most expensive players of all time – former Barcelona team-mate Neymar and Kylian Mbappe.

PSG president Nasser Al-Khelaifi believes that recruiting Messi will be decisive in keeping Mbappe at the club, with the 2018 World Cup winner’s contract set to expire in 2022.

“He wanted a competitive team and I think we have the most competitive in the world, so there is no excuse for him now – he can’t do anything else but stay,” said Al-Khelaifi.

Defending the club’s spending, Al-Khelaifi added: “What you as a media need to focus is not only the negative side but the positive side he will bring to the club.

'You lied to me' : Barreto to Kotoko management