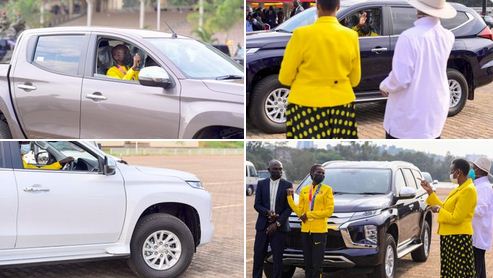 Three Ugandan athletes who won medals at the just concluded Tokyo Olympic Games have been rewarded with cars and a monthly stipend.

The country’s President Yoweri Museveni on Wednesday handed over the vehicles to Joshua Cheptegei who won a gold medal in the men’s 5,000m and a silver in the 10,000m race, Peruth Chemutai who won gold in the women’s 10,000m women’s, and Jacob Kiplimo who bagged a bronze medal in the 10,000m final.

Museveni also pledged to build houses for their parents.

On behalf of the athletes, Cheptegei thanked Museveni, the First Lady and Minister of Education and Sports Janet Kataaha Museveni and the people of Uganda for their support.

Uganda sent athletes in field and track events, boxing, rowing and swimming at the Tokyo Olympics.