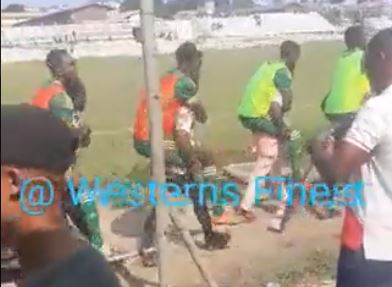 Superstition is not new to football and definitely not to the game in Ghana.

Who can forget the infamous match between Asante Kotoko and Aduana Stars where both sides refused to start with all 11 players?

A lot of teams do simple things like wear coloured bands (cloth) on their arms or legs and others, like, VRA Youngsters this weekend, take things much further. 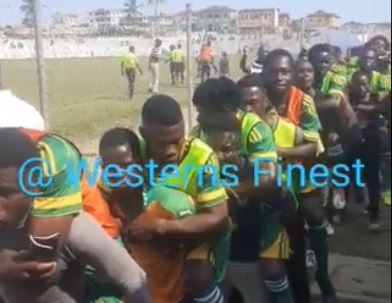 It’s often brushed aside if the team wins but if, despite any “precautions”, they still lose, it’s quite embarrassing.

VRA Youngsters, a second division team based at Shama in the Western Region, were left red-faced this weekend when they faced Sekondi Eleven Wise.

In a bid to avoid Eleven Wise’s “juju”, the players of VRA youngsters opted to be carried onto the pitch.

You would have expected their elaborate plan to yield some positive results and maybe it did; they only conceded three goals at the end of the game.

Players of VRA Yongsters,a division two club based in the Shama District of WR were carried to the field by supporters claiming they were avoiding Juju against against Sekondi Eleven Wise Fc.

After all of these scenes they still lost 3-0 to Sekondi Eleven Wise FC.
😂😂😂😂😂😂 pic.twitter.com/VGDlMgZNMS

Maybe the score would have been worse had they not being carried onto the field.😂😂😂😂😂😂

😂. The gbala dey the air inside… Them take am in already https://t.co/XrxCgqoiNv