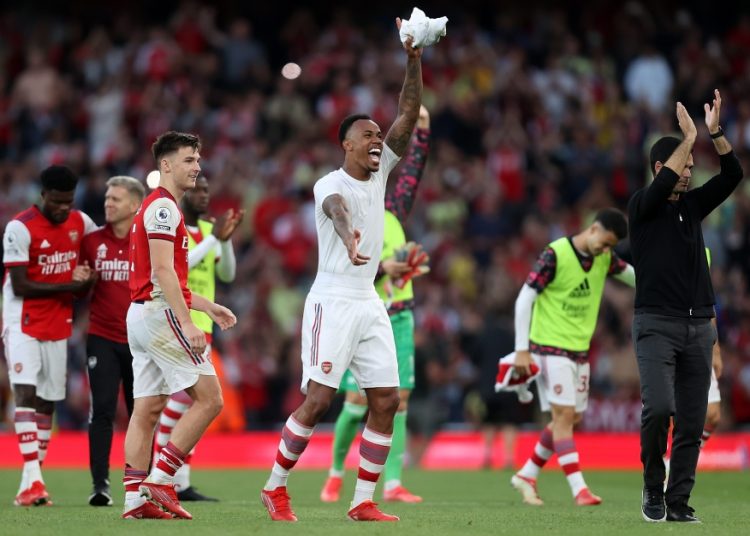 The north London bragging rights belong to Arsenal as they blew Tottenham away in the first half to seal a 3-1 win at the Emirates Stadium.

Arsenal went in at half time 3-0 up thanks to goals from Emile Smith Rowe, Pierre-Emerick Aubameyang and Bukayo Saka.

It was a fine performance from Arsenal but it’s Aubameyang’s goal that would have given fans the most pleasure.

After slotting Smith Rowe’s pull back home, the Arsenal captain celebrated on his knees in front of the travelling Spurs faithful, much like when Thierry Henry did at Highbury after scoring against Spurs in November 2002.

Henry was actually in attendance at the north London derby, which saw Heung-min Son bag a consolation goal for Spurs late in the second half.

Both sides are in a difficult period but Arsenal played like the superior team because they simply wanted it more.

Smith Rowe gave them a deserved lead on 11 minutes as he fired in Saka’s intelligent low cross.

Arsenal continued to apply the pressure and their lead was doubled on 27 minutes. Smith Rowe turned provider this time as he cut it back to Aubameyang, who put the ball past Hugo Lloris with his left peg.

Aubameyang’s knee slide will have irked the Spurs fans hugely but not as much as what happened on 36 minutes as Saka struck with his right foot on the counter-attack – the goal leading to some Spurs fans leaving the ground before half time.

The leavers missed an improved performance by their side in the second half with Harry Kane perhaps unlucky not to get a penalty after being clipped by Ben White.

Spurs did have something to show for their efforts with Son getting on the end of a low cross from the left, while an acrobatic save from Aaron Ramsdale prevented Lucas Moura from netting and making it a grandstand finish.

But Arsenal were more than good value for the win which takes them above Spurs in the Premier League less than a month after the two sides were at opposite ends of the table.