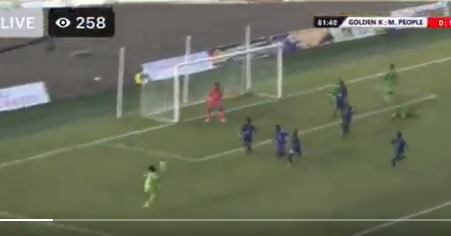 The substitute controlled a ball inside the box with his left football, rotated 360 degrees in front of two defenders to wriggle his way out and then nutmegged another player to hit the bar line before shimmying the goalkeeper with a sharp right and left footwork.

Asante then slotted the ball past the near post to cap a virtuoso display.

His goal gave Golden Kick FC the equalizer against Mobile Phone People to draw 1-1 before they went on to win 6-7 on penalties.

Golden Kick have qualified to play in Zone III of the Division One League next season.

Chances you’d not see a better goal than this one till the year ends is sky level.
Desire Asante scored this for Golden Kicks against Mobile Phone People in a Divison 2 playoff game in Ghana 🇬🇭.pic.twitter.com/4JHXsNXaFp