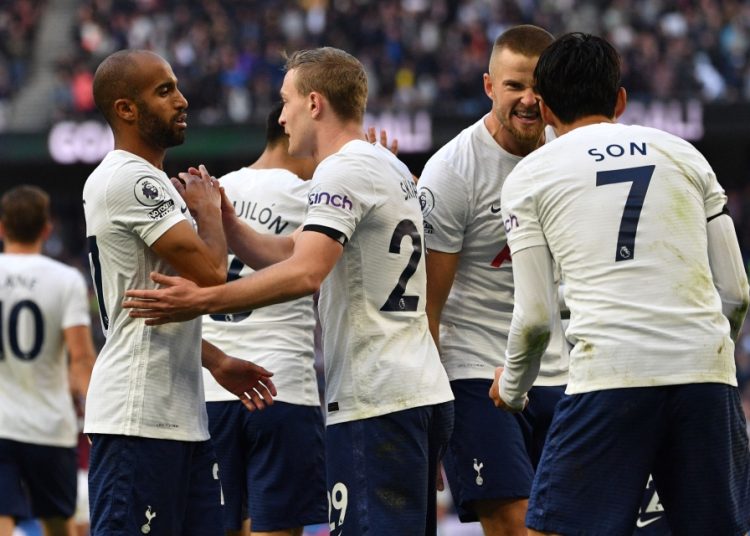 Tottenham Hotspur beat Aston Villa 2-1 in the Premier League but Harry Kane was goalless again and sloppy play at both ends threatened to ruin their afternoon.

Pressure on manager Nuno Espirito Santo has eased with the win but poor finishing and some scrappy midfield play could easily have seen the Villans land a sucker punch on Spurs.

A goal from Pierre-Emile Hojbjerg had set the hosts on their way in the first-half, despite various dangerous spells from Dean Smith’s men.

Often it was Eric Dier and Cristian Romero doggedly defending at the back to repel Villa with mistakes littering Spurs’ play.

They even struggled in front of goal with Son particularly profligate.

Ollie Watkins did level as it looked like Tottenham would be made to pay for their misses.

But a breakaway strike, given as an own goal by Matt Targett, after 74 minutes, ensured Nuno gave himself breathing room after a tough month in N17, which saw them lose three consecutive league games.

Spurs started slowly on home soil and, despite a formation change to 4-2-3-1, looked sluggish with Villa have the majority of possession, without offering much threat in the penalty area.

But Nuno’s side gradually adapated to the game in north London with Son’s hard-running up-front unrewarded, while Kane almost produced one of the moments of the season.

A foul on Tanguy Ndombele saw the ball fall static just inside the Aston Villa half, and the England captian quickly darted for it, spotting Emiliano Martinez off his line, forcing the Argentina into a smart save.

Seconds later, Son curled a shot wide of the post as confidence grew in teh Spurs ranks.

And then they made the breakthrough. A Romero interception kicked it all off and a surging run from Hojbjerg saw the Dane exchange passes with Son.

With the ball under control, Hojbjerg showed great composure to whip the ball beyond Martinez.

After the goal, though, sloppiness threatened to derail Spurs, a Skipp error resulted in a yellow card and a dangerous free-kick, while slips and mis-kicks from, Hojbjerg, Son and Ndombele halted promising moves.

Villa’s set-pieces always caused danger for Spurs with the visitors having a real height advantage over their opponents, while John McGinn smashed a fine volley just wide as Smith’s side looked to strike back.

Towards the end of the first half, Spurs could barely make it out of their penalty area such was the intense pressure but they managed to hold firm with vital challenges and blocks from Romero and centre-back partner Dier.

It was more of the same after the break with Romero putting his body on the line to stop Targett’s close range effort.

Son was guilty of several misses in the second half, whether that be striking wide or straight at Martinez.

And they were made to pay when Villa broke through the Spurs midfield far too easily and Targett’s cross found Watkins, who tapped past Hugo Lloris.

But the Villans were only level for four minutes.

Son may have been wasteful with his shooting but, when it came to the crunch, he laid on a superb assist to put Tottenham back ahead.

A well-timed burst down the left saw him sprint into the box and, after outfoxing Kourtney Hause, he slipped the ball across the face of goal for Lucas Moura to tap home, although on review it was Villa left-back Targett who got the final touch.

Son wasn’t the only profligate Spurs ace, with Kane missing another good chance to put the game to bed.

The win propels them into the top half of the table and back above rivals Arsenal as they attempt to fight their way back into the top six this season.