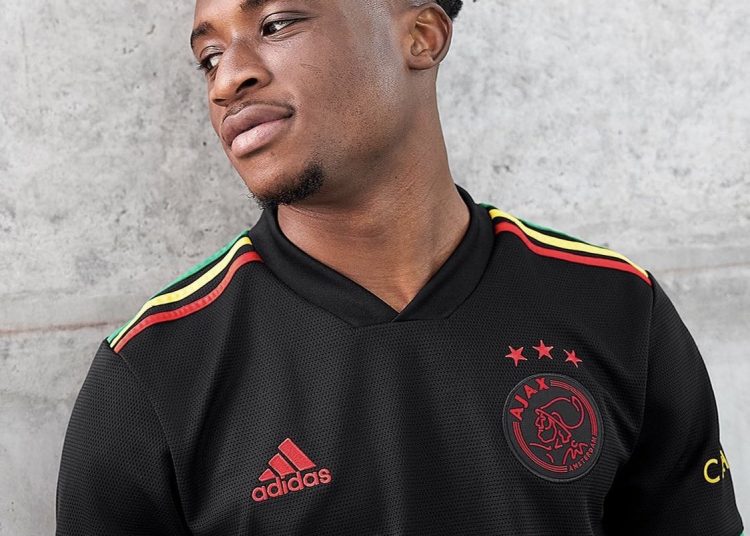 Ajax’s Bob Marley-inspired away shirt had already had an oversized impact before it was ‘banned.’

Away kits from the Amsterdam club rarely have an impact outside the Netherlands, but this one was different.

The black shirt is decorated with the red, green and gold colours associated with the Rastafari religion and one of its most famous followers reggae star Bob Marley.

Just under the neck is the flourish that caught most people’s eye, three birds perched artfully atop the crosses from the symbol of Amsterdam.

It was, of course, a reference to the famous ‘Three Little Birds’ song by the Jamaican artist.

The track was adopted as a club anthem by Ajax fans after it was played on the speakers while they were being kept inside the Cardiff City Stadium following a 2008 friendly.

According to Ajax, Three Little Birds is now sung at every single game “regardless of the score.”

To affirm the connection between the shirt and its inspiration the club even got the views of Bob Marley’s daughter Cedella.

“I am beyond touched that Ajax has taken Three Little Birds and made it their anthem,” she said

“Stories like this warm my heart and show how impactful songs like Three Little Birds can be. Soccer was everything to my father. To use his words: football is freedom.”

Many fans across the world, embraced the effort to do something interesting in a soccer jersey.

In a world where most shirts fall victim to templated repetition, this was a jersey that stood out.

But, apparently, UEFA was having none of it.

The Three Little Birds logo were deemed to be in breach of its rules around what can and cannot be displayed.

According to UEFA regulations the “collar zone” must only contain “team identification” and can’t have manufacturer or sponsor logos.

The European soccer governing body did not feel the Ajax fans adopting the 1977 Reggae classic a strong enough link to be classed as a team identification.

So it wasn’t allowed.

What are UEFA’s jersey rules?

There are restrictions on the size and quantity of almost every item on a shirt. Teams are allowed one badge and one manufacturer logo per jersey, but they can only be so big.

Colours and designs are limited too.

For example, you can’t have different coloured sleeves unless you have a hooped, banded, striped or checked shirt.

Nor can you have a jersey that has lines that don’t cover the length and breadth of the shirt.

These rules render many classic shirts, particularly from the nineties, unusable today. Iconic numbers from the likes of Italian brand Kappa would never have made it on to the pitch.

Its 1997 Porto kit with a dragon design cascading across the front of the jersey couldn’t be worn, nor even Manchester City’s seemingly straightforward away jersey from the same era (below).

While easy to slam UEFA as killjoys stifling innovation, it’s important to remember that some of these rules have been brought in to avoid clashes and so players can see each other.

Even so, it’s remarkable the extent to which jersey designs are dictated by governing body regulations.

They should give supporters pause for thought before bemoaning the latest effort from their club.

News of the so-called ‘UEFA ban’ of the Ajax shirt spread after fans noticed the Three Little Birds detail was missing during the jersey’s first outing in the 2-0 victory against PEC Zwolle.

Media outlets began asking why and UEFA was forced to set the record straight.

It turned out, the Dutch side had been informed a year ago that the birds would not be allowed.

“When the manufacturer presented for pre-approval the away shirt sample of Ajax back in September 2020, as per the usual process, UEFA informed them […] the birds could not be displayed on the back of the collar zone of the team shirt as this area is reserved only to team identifications,” UEFA explained.

“The pre-approval process with the manufacturers is designed to avoid any last-minute issues when the final kits are sent for approval.

“[It] also allows manufacturers to ensure proposed designs are in line with both domestic and UEFA Equipment Regulations, and if not to make any appropriate changes before production starts.

“In this instance, the manufacturer was aware the inclusion was not in line with UEFA Equipment Regulations, and was given the options about how the design could be adapted to be conformant with UEFA regulations.

“However, they made the decision on this occasion to maintain the original design and keep a different version of the shirt for use in UEFA competitions.”

In other words, they knew all along they’d need a different version to play in but did it anyway.

This aspect has not made the headlines, as media have focused instead on the angle that the jersey has been “banned.”

Not that the ‘ban’ narrative is bad for Ajax or Adidas, it only serves to stoke the interest further.

Even before the Three Little Birds story broke, the jersey was being lauded by experts in marketing and PR.

“This is a shirt for fans that taps into community, passion and inspires togetherness at a time when we need it most,” gushed Ross Hopcraft, managing director of The Studio at American PR giant Hill+Knowlton Strategies London office.

“[Soccer] fan or not, Ajax fan or not, seeing someone walk past in this shirt will raise a smile in us all. What’s not to love?”

The public seemed to agree. They have bought the jersey in droves.

“A record number of shirts were sold in one day.

“We had already responded to the interest by purchasing much more than ever.”